SIX IS THE BEST FOR WHITLOCK! 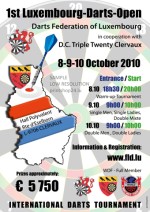 SIX IS THE BEST FOR WHITLOCK!

SIMON WHITLOCK won through to the Championship League Darts Winners Group at the sixth time of asking when he defeated Vincent van der Voort in a deciding leg in the Group Six final on Thursday.

Whitlock, who had hit a nine-darter in Wednesday^s Group Five, extended his ever-present record in the play-offs by winning six of his seven league games in Group Six of the internet-streamed event.

He then defeated Andy Smith 6-4 in the semi-finals to reach a fourth final of the tournament, and finally took victory against van der Voort.

The Dutchman gave as good as he goes during a tense final, coming from 2-1 down to lead 4-3 with a 100 finish and a brace of double eight checkouts.

Whitlock took the next two to edge ahead before van der Voort won leg ten on double 12 to force a tense decider.

The Australian opened with a 177 and added two 140s to take the initiative, before finishing double 16 for a 12-darter to secure his place in next Thursday^s big-money Winners Group alongside Phil Taylor, Gary Anderson, Paul Nicholson, Mervyn King & Mark Walsh.

"It^s brilliant to finally qualify!" said Whitlock. "It^s been a good journey in these six groups and very hard at times but it shows that my persistence paid off.

"I^ve been consistent enough in the league games but not had the success in the play-offs, but I was desperate to win and pulled out a great final leg against Vincent.

"I can relax on Tuesday and Wednesday now knowing I don^t have to play and can prepare for the Winners Group, and hopefully I^ll be successful there."

Van der Voort had finished sixth twice so far this week, but edged into the play-offs before defeating league leader Steve Beaton 6-5 in their semi-final by taking out 118 in the deciding leg.

Alan Tabern and Kevin Painter missed out on a semi-final place on leg difference to van der Voort, while Denis Ovens and Colin Osborne were eliminated.

2009 champion Osborne lost all seven league games, although he could feel somewhat unfortunate after suffering 6-5 defeats in his opening three games.

Championship League Darts is screened solely on the internet through LIVEPDC.TV and a series of 30 bookmakers^ websites worldwide, and offers a potential total prize fund of over £200,000, plus places in the Grand Slam of Darts for the eventual finalists.

Played over nine days from September 27-29, October 11-13 and October 18-20, the event offers £50 per leg won prize money in the league phase and £100 per leg won in each group^s Play-Offs, with prize money doubled in the Winners Group.