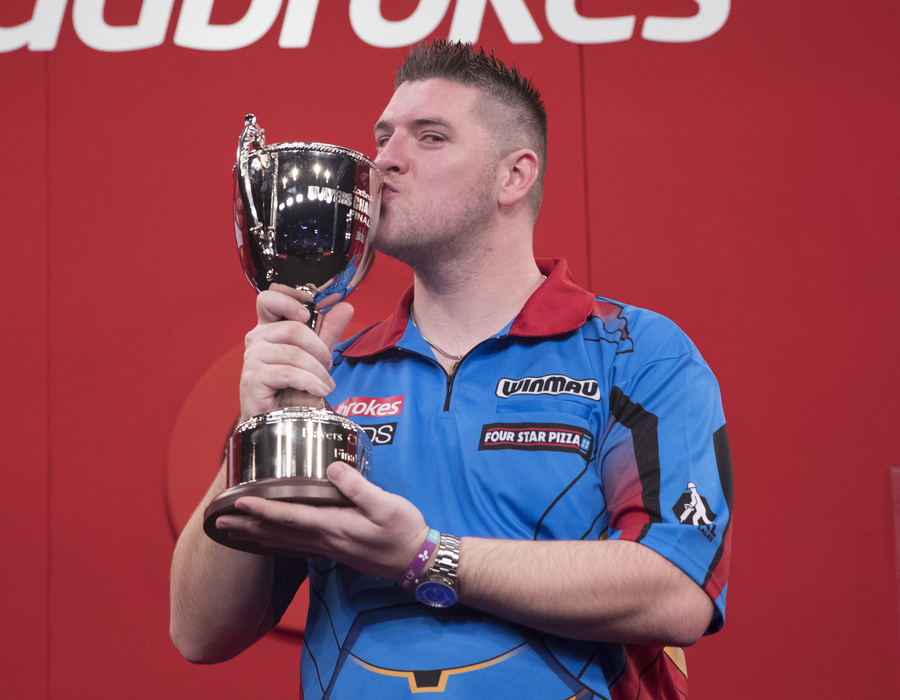 The 2019 Ladbrokes Players Championship Finals begins on Friday at Butlin's Minehead Resort, as Daryl Gurney begins his title defence against Luke Woodhouse on a packed opening day of action.

The three-day event will see the top 64 players from the 2019 Players Championship Order of Merit, following the year's 30 floor events, in action from November 22-24.

Play on the opening two days will be split across two stages, with the action on the main stage in the Skyline Arena accompanied by games in the intimate Reds venue.

The main stage action will be broadcast live on ITV4 in the UK, on PDCTV-HD for Rest of the World Subscribers and through the PDC's worldwide broadcast partners including DAZN and RTL7.

Matches from stage two on Friday and Saturday will be streamed live for PDCTV-HD Subscribers at video.pdc.tv.

Gurney famously sprinted away from the oche to celebrate with family and friends after hitting the match-winning bullseye to defeat Michael van Gerwen in last year's final.

Gearing up to face TV debutant Woodhouse in his first assignment of the weekend, the Northern Irishman insists he is taking nothing for granted.

"Winning this event last year is probably my greatest achievement in darts," said Gurney, whose first round match will be on the main stage.

"I said at the time it was probably the scariest bullseye I've ever hit in my life, but that feeling when it went in is why I play the game.

"Coming into this event as champion means nothing though and I know I will have to be on my game against Luke, who is an up and coming player I rate very highly."

Van Gerwen, a four-time winner of the Players Championship Finals, is also in action on the main stage as he meets Luke Humphries, who will also compete in the PDC Unicorn World Youth Championship final on Sunday.

Having tasted defeat in the event for the first time since 2014 in his defeat to Gurney, world number one Van Gerwen is keen to regain his crown ahead of his World Championship defence.

"Of course it was disappointing to lose in the final last year, I don't lose many finals," admitted Van Gerwen, the 6/4 title favourite in Minehead with sponsors Ladbrokes.

"But on the day Daryl took out the big shots when it mattered, so well done to him, but now I'm coming to win my title back - every tournament I play I turn up to win.

“It's the last tournament before the World Championship so my goal is to play to a good standard and give myself even more confidence going into Ally Pally."

Van Gerwen was defeated by Gerwyn Price in the semi-finals of the Grand Slam of Darts in Wolverhampton last Sunday, and the Welshman comes into this event as top seed on the back of retaining his Grand Slam title in Wolverhampton.

A winner of three Players Championship events in 2019, Price is up to a career-high third on the PDC Order of Merit and he will play Mickey Mansell in his opening round tie.

"I'm playing well, I'm up to number three and I probably deserve to be three, maybe two," said Price.

"I've had a good year, 18 months, but it doesn't happen all the time. I've been playing well and it breeds confidence, and I've been confident in every tournament for the last six months. I'm just thankful to win this again.

"I'm coming into the tournament as number one seed but that doesn't mean too much because top players are scattered everywhere in the list of seeds for this one."

Elsewhere, Raymond van Barneveld, competing in his penultimate PDC event, will face Nathan Aspinall, who lifted the UK Open title on the Minehead stage in March.

Saturday sees the second round of the £500,000 tournament held in the afternoon session and the third round in the evening session, with play continuing across two stages.

Sunday then sees the action centred on the main stage, with the quarter-finals in the afternoon session and the semi-finals and final in the evening session, along with the PDC Unicorn World Youth Championship final.