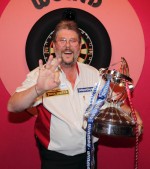 Winmau are delighted to announce the signing of one of the hottest names in world darts - Simon "The Wizard" Whitlock.

The 42 year-old Australian (who is now based in the UK), capped a stunning week of darts by defeating the World^s number 2 ,3 and 4 seeds on his way to the PDC World Championship final on his first attempt, and joins Winmau on an exclusive 3-year contract.

"This sponsorship deal marks a great year for me", revealed Simon, "I^m really happy to join Winmau. I love their passion for darts and for providing the best equipment in the business. It^s great being able to switch between any set of darts and not getting stuck with one match set, as all my Winmau darts are exactly the same".

Simon, who recently switched over to the PDC, is one of the few players who has shot into the PDC^s top 16 within a year of entering. He has already made his mark winning 3 Pro Tour events.

Winmau Head of Marketing, Simon Hall, said "I^ve watched Simon^s darts for many years and have always been a big fan of his amazing finishing power and will to win. It^s great that Simon chose to work with us and we^ll be doing all we can to help him win many more major titles in the future".