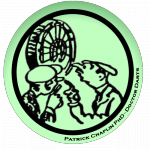 MARTIN ADAMS has won his third successive BDO Winmau World Masters title – equaling the record of Bob Anderson who is the only other player to achieve the Masters hat-trick from 1986 to 1988.

Martin, who is the reigning BDO Lakeside World Professional Champion, has now been crowned World Masters Champion in 2008, 2009 and 2010.

He won his latest title live on BBC TV in some style, triumphing 7-3 over Stuart Kellett with a power scoring display – hitting nine 180’s and finishing with a 121 checkout to win the £25,000 title.