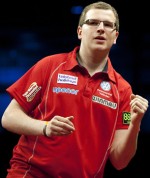 REIGNING champion Phil Taylor was stunned by Potteries rival Winmau’s Ted Hankey in a deciding leg thriller to seal his own place in the second round of the Daily Mirror Grand Slam of Darts.

Hankey had crashed out in the group stage of last year^s Grand Slam when, as the reigning Lakeside Champion, he lost two of his three matches in the round-robin phase.

However, he remains unbeaten after two matches in Group H and is now guaranteed a second round berth following a superb performance, in which he averaged almost 104 and hit four 180s.

"I^m really happy because I played well and am delighted with the win," said Hankey. "Phil came back at me well but I held on and am very pleased.

"I felt I let myself down last year but I had a tough time. I^ve got through my shoulder problems and I was really looking forward to coming back to Wolverhampton, so to be in the last 16 is great."

Taylor, playing for only the second time competitively whilst wearing glasses, found himself 2-0 down before taking the game into a decider, but failed to pressurise Hankey and must now defeat Wes Newton to stay in the event on Wednesday.

"Ted outplayed me," said Taylor. "My darts were clipping the wires just on the wrong side and I know I didn^t play as well as I can.

"I^m struggling with the glasses and because it^s new for me I^m thinking about it all the time, but I^ve got to get used to them.

"I^ll have a tough challenge against Wes Newton on Wednesday but both of us know the task and we probably prefer a shoot-out between us to see who gets through. I^ll get ready and I^ll be up for it."

Wright, the PDC Women^s World Championship runner-up, had been whitewashed by Raymond van Barneveld in her opening group game, but twice missed darts to lead against Fitton.

After coming from 3-1 down to level, she was made to pay as Fitton took out finishes of 119 and 157 to edge to victory - handing him a lifeline in the tournament ahead of Wednesday^s final contest with Raymond van Barneveld.

Fitton opened the match with double six to take the first leg, but Wright took the second despite a 180 from the Stockport ace, hitting double top for a 70 finish.

She also had a chance in the third to break throw, missing two darts at double ten for an 80 checkout as Fitton sneaked a 2-1 lead.

However, Wright returned with scores of 140 and 180 before winning the fifth leg in 13 darts on tops to cut the lead to one - before then hitting another maximum and double 16 to level, raising hopes of emulating Anastasia Dobromyslova^s win over Vincent van der Voort in last year^s event.

Three ton-plus scores saw her reach the double first in the next, but she missed two darts at tops to lead, and after the second hit double one she missed a further dart at double 19.

Fitton returned to the oche to hit the same bed, finishing a superb 118 combination as he moved 4-3 up before hitting a 174 score and 157 checkout to take victory.

"The pressure was on me anyway after I lost the first game against Colin Lloyd but Tricia played fantastically," said Fitton. "I^m glad I won the game eventually and I had to pull out some finishes.

"I^ve given myself a chance and we^ll see how it goes against Raymond now."