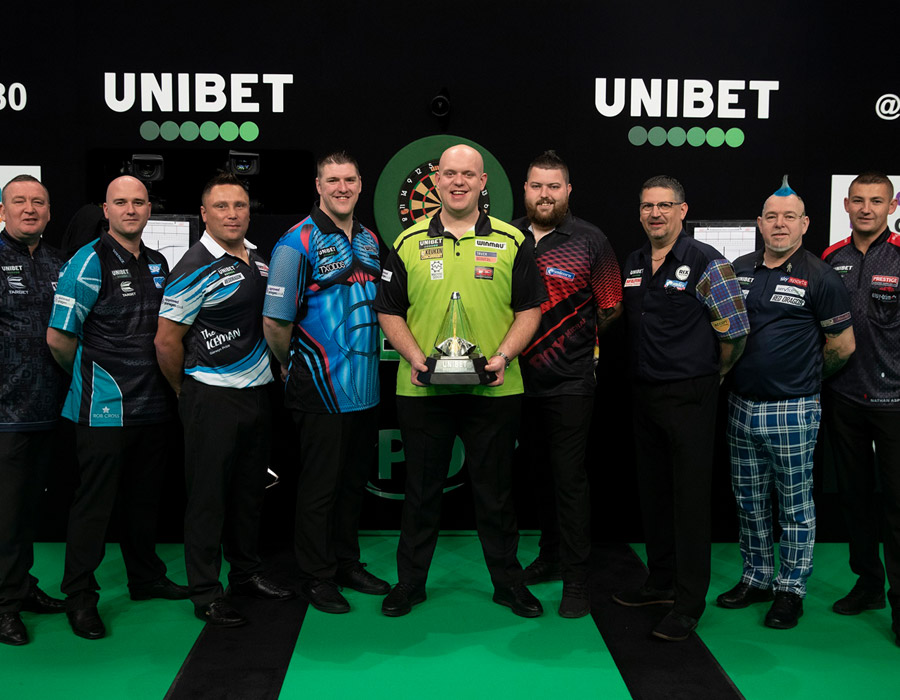 The 2020 Unibet Premier League will return on Tuesday at the Marshall Arena in Milton Keynes as a near-six month hiatus ends with six straight nights of top-class action.

Tuesday's Night Seven will see the first Premier League fixtures take place since the visit to Liverpool on March 12, which was the last PDC event to be held in front of a crowd before the coronavirus pandemic caused the suspension of competition.

The tournament will resume with six successive nights behind closed doors from August 25-30, before the final four nights of the league phase take place from September 2-5 in the race to the Play-Offs, which are set to take place at The O2 in London on October 22.

Night Seven will see Michael van Gerwen take on Rob Cross in a repeat of the 2019 Premier League final, which saw the Dutchman triumph 11-5 to seal his fourth successive title and his fifth triumph in the event.

The world number one is looking to bounce back from disappointment at the World Matchplay, which saw him go down to a shock defeat to Simon Whitlock in the second round, while Cross will be hoping to steer himself away from elimination danger.

"Of course it was disappointing to lose at the World Matchplay, but sometimes these things can happen in darts," Van Gerwen explained.

"It feels like a long time ago and since then I've been looking forward to getting back on stage and doing what I do best.

"I noticed during these breaks that I really miss playing on the highest level every week and that is a good sign to me that I am hungry.

"The Premier League is always a special tournament for me and now I need to make sure I'm on top where I belong by the end of the league phase."

Glen Durrant was enjoying a dream debut in the tournament prior to the break, and he is sitting pretty at the top of the table heading into the restart.

The three-time Lakeside Champion will face Peter Wright on Tuesday, with the reigning World Champion looking to force his way into the Play-Off spots following an inconsistent start to the campaign.

"I was gutted when Newcastle was postponed back in March, it would've been a huge honour for me to play in the north-east," said Durrant, who hails from Middlesbrough.

"Obviously, safety has to come first though and I'm just glad to be back playing darts at all. Huge credit has to go to the PDC.

"Losing in the semi-finals of the World Matchplay was a real heartbreaker and a missed opportunity. The bookies aren't often wrong, and for a big part of the tournament I was the favourite. It was a tough loss to take.

But you can only look forward and I'm in a fortunate position to come into the Premier League restart top of the table.

"I said at the start of the tournament my only aim was to avoid being eliminated on Judgement Night but with the position I'm in now, I'm going to have a real good crack at making The O2."

At the other end of the table, Daryl Gurney is hopeful the break from action can help his fight against what would be his first early elimination from the tournament - with the ninth-placed player after Thursday's Judgement Night exiting the event.

Gurney currently occupies bottom spot on the Premier League ladder and is three points adrift of Cross and Gerwyn Price, having drawn two and lost four of his opening six games - though three of those defeats were by a 7-5 scoreline.

Tuesday's resumption will see the two-time TV champion face Chris Dobey behind closed doors in Milton Keynes, instead of in front of what would have been a partisan crowd in Newcastle.

"Things weren’t going my way at all at the start of the Premier League, hopefully the long break and change in schedule can help me," Gurney explained.

“Before lockdown it could have taken me a fortnight to get up the table. But now that could only take 48 hours. That’s my incentive.

“Obviously it’s still just down to me. I still believe I’m in control of my own destiny but I need to hit the ground running on Tuesday. If I can get my first win, I think I can get up the table.

“It’s going to be very different for all the players. There’s no doubt if you can hit form straight away, it could be a really good thing to have the fixtures all in one hit over two weeks.

“I’ll go there as I always do, just to focus on me and nothing else. There’s a lot of distractions right now, different venue, no crowds and stuff like that. You’ve got to block it all out and just play the board like you would in the ProTour.”

Two-time Premier League winner Gary Anderson comes into the restart on the back of a promising run at the World Matchplay, which saw him end as runner-up to Dimitri Van den Bergh.

The Scot has it all to play for in the remaining Premier League nights, as he sits four points ahead of ninth-placed Gurney, but is also only three points behind league leader Durrant.

Despite meeting three of the world's top four on consecutive nights, Anderson is in confident mood ahead of his meeting with former protégé Michael Smith, whom he defeated in the semi-finals of the World Matchplay.

"I take it as it comes, I won't be putting too much pressure on myself. For me it's all about getting my throw back more than anything," said Anderson.

"To win any tournament nowadays with all these boys, you've got to beat every one of them. I don't think Michael van Gerwen's going to get it all his way now; the boys are stepping up the ladder even more now.

"It's hard; to win anything nowadays you've got to beat everyone that's put in front of you.

"We've got six nights of the Premier League; it will be good, you're playing every night so I think once you get a few nights the darts will start [coming] back."

Price - one of Anderson's top-four rivals - admits he will have to adjust to the new playing environment quicker than he did at the World Matchplay if he is to secure a first Play-Off berth.

Price's miserable record at the World Matchplay continued as he went down 10-7 to Danny Noppert, his fourth successive first round exit at the summer event.

The world number three believes the unique playing conditions contributed to his demise as he prepares for Tuesday's first match back against Nathan Aspinall, who also suffered a round one defeat in Milton Keynes.

"I just didn't adjust to the new surroundings at the World Matchplay and I couldn't get myself going in that match," Price admitted.

"I'm at my best in big majors when I've got the crowd behind me giving me the adrenaline I need.

“But I think in any tournament the first round is always the toughest one, especially playing in the new conditions.

“I just wasn’t confident going into the Matchplay having not played for so long. Sometimes the crowd can help you and pull you through games.

“I think 2020 is a write-off in some ways but I haven’t written the league off yet, hopefully I can stay in it until the end, get to the final and win it."

The opening three nights of the six in a row will see the conclusion of the Premier League's first phase, which will culminate in the bottom-placed player in the league table being eliminated.

In addition, the Challengers concept will conclude as Dobey's tie with Gurney is followed by Jeffrey de Zwaan playing Wright and Jermaine Wattimena taking on Price.

The Unibet Premier League will be broadcast live on Sky Sports in the UK, on PDCTV for Rest of the World Subscribers and through the PDC's worldwide broadcast partners including DAZN and RTL7.

The fixtures for Night Ten onwards will be confirmed following Judgement Night.