The Gurin Company hits the Bullseye. 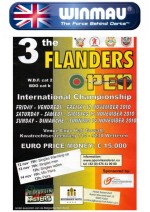 The Gurin Company hits the Bullseye.

The President of The Gurin Company, Phil Gurin who was behind the NBC version of the Weakest Link, met with Andrew Wood in London and they signed the deal. Both Phil and

Andrew is keen to see Bullseye on American television. This will include the upgraded Bullseye format with the new additional optional end game where the contestants can try and win, ‘Bully’s Million Dollar Jackpot’.