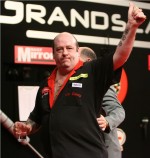 Trophy Champ is the app for the darts fanatic in your life who lives and breathes life around the oche, dreaming of one day lifting a major darting trophy. It creates instant darting legends and overnight successes, for less than the price of a pint of beer.

Launched in time for Christmas 2011, Trophy Champ is in a league of its own, with the kudos of being the official British Darts Organisation’s app and the benefit of offering a double whammy. It not only creates amazing, personalised photos of the app user and friends holding a prestigious BDO trophy, but also generates a wow factor picture of the ‘subject’ throwing the perfect 180!

This sports app is an entertaining and easy photo manipulator for anyone, of any age, to use.  It takes the user seamlessly through a two-stage process, in the pursuit of sporting glory:

ϖ The user can take a new photo or upload an existing photo image, selecting who’s going to be featured as a new BDO darts champ individually or as a group.

ϖ They add the BDO logo and personalise the glory shot, by adding a name and a caption.

ϖ The user strikes their best dart-throwing pose for the camera.

ϖ They follow simple instructions that help achieve the perfect shot – in more ways than one!

ϖ They watch the app conjure up the iconic – and often elusive – 180!

It’s then just a question of saving the images generated and either instantly sharing them via Twitter and Facebook, or unveiling them at a birthday event or on Christmas Day!

Trophy Champ is a fantastic ego boost for darts players of all abilities and an aspiration-fuelled app for young league-playing arrows fans wanting to climb the darting ladder to become the new BDO Champion, like Martin Adams.  Then again, it might be a perfect pastime pleaser for the more mature darts player, who’s always thought themselves a bit of a Bobby George, or for the man who wants to have the ultimate trophy wife!

The BDO is planning app updates in the coming months, such as a gallery, photos of darts fans with stars of the darts world and the facility to create cards and gifts from Trophy Champ images.  In the meantime, stop champing at the bit and head to the Apple store on Monday 24th October 2011 to download the BDO Trophy Champ app on release