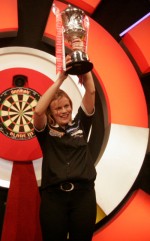 MERVYN KING defeated Wes Newton 6-3 to win his first Players Championship since January in the Spanish Darts Trophy at the Melia Hotel, Benidorm.

King has spent much of 2011 battling tendinitis in his throwing elbow, but capped a recent return to form - which included a run to the semi-finals of Championship League Darts - by picking up the £6,000 first prize in Spain.

The 45-year-old began Sunday^s event with a whitewash of Spaniard Eduardo Gonzales, before defeating Steve Maish, Belgium^s Kurt van de Rijck, Ronnie Baxter and Colin Osborne to reach the semi-finals, where he saw off Jamie Caven 6-2.

In the final against Newton, King took the opening leg with a superb 138 finish before the Fleetwood ace levelled with a 97 checkout and hit double top to punish King^s misses and lead.

King broke back but was punished again in leg five as Newton hit double ten to lead 3-2.

Finishes of 124 and 98 from King moved him 4-3 up, and when Newton missed double five in the eighth he took out double ten to edge towards a victory which was sealed in style courtesy of a 136 checkout in leg nine.

Newton^s run to the final included a fine 6-3 win over Raymond van Barneveld in the semis, alongside defeats of three other World Champions in Mark Webster, Steve Beaton and Adrian Lewis.

The Players Championships in Spain were the last European-based PDC ProTour events of 2011, with the four players from the European Order of Merit to qualify for the Ladbrokes World Darts Championship in December.