The truth behind the Worlds Top Dart Players 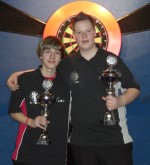 The truth behind the Worlds Top Dart Players

How did you develop your huge passion for vision and accuracy in sport?

I was the most improved snooker player in my local area, and whilst playing Barry Pinches I missed a simple pot for 57 and Barry said "How did you miss that!!”  I was so shocked that next day I went out and found a snooker coaching book.

I diligently followed the coaching to the letter, with the style and stance etc and in 6 months I simply couldn’t pot a long ball and essentially lost my entire natural feel for the game at only age 25.

What fault do you most see in dart players?

A Lack of understanding in eye-dominance which leads to offline errors and players who don’t sight perfectly down the centre line of the dartboard.

These habits can be formed for many reasons like  copying other players or just feeling their way to play darts, either way it only delivers a short term improvement as most dart players reach their best level fairly quickly, usually after a few years playing, then never progress passed  this point.

Why do so many dart players seem to discount what you see as an unarguable fact?

Top players become afraid of losing what they have got and scared of the unknown, so they play with compensating errors.

It’s far easier to discount perfect sighting and not accept that they have played from an imperfect position for so many years.

Getting perfect sighting requires discipline and hard work to undo the damage those years of playing offline has caused, and as you can see that the best players in the World in my opinion are pretty close to being online, yet not perfect!!

What challenge would you make any dart player to prove your point?

I would ask them to aim a gun at treble 20 and compare it to their darts stance. The difference in most cases is significant.

Following that I would ask them to try and aim a gun at Treble 20 with their head to the side of the gun barrel not looking down the sight.

At this point every player says "I would NEVER do that” so my question back is why do you do that in your darts game?

What is the best improvement in darts performance you have ever witnessed?

I must admit I’m a bit of an anorak and avid follower of darts on the TV, 2 guys who have impressed me most over the passed 2 years are Mark Webster and Dean Winstanley. Whether knowingly or not both players have moved into much better centre-sighted positions and both are clearly reaping the benefits.

In all sports how much prize money do you estimate SightRight has helped to achieve?

Good question, but I guess that SightRight principles applied by the top sportsmen I’ve coached in snooker, darts and golf have delivered over £10 million in prize money.

What really bold statement would you make about perfect sighting and alignment in darts?