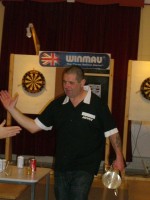 Winmau and its retail partner Powerdarts are delighted to announce the signing of Lincolnshire County’s Craig Barratt.

Craig is one of the rising young stars on the County circuit and has only been playing darts for 4 years. His short career has already seen him crowned Nottinghamshire Open Champion 2011 and he had an impressive run in the 2011 Winmau World Masters reaching the last 64.

Winmau was made aware of Craig’s talent by Lee Dovey of Powerdarts, and Lee felt that Craig would benefit greatly from a partnership with the world’s leading darts brand. Having studied Craig’s recent form, his incredibly committed attitude and his huge potential for the future, Winmau were only too pleased to put pen to paper!

Craig said "Joining the Winmau team is like a dream come true. I can’t believe I am being supported by the same company that sponsors such legends as Andy Fordham, Ted Hankey and Trina Gulliver. I am sure that, with Winmau’s help, I can go on to win more major tournaments in the future”.

Ian Flack, Sales and Marketing Director of Winmau, said "Craig is an amazing talent and, at just 23 years of age, all at Winmau believe he has a very bright future ahead of him. It is one of the finest pleasures in the game to be able to support and help the younger generation to fulfil their ambitions, and we look forward to working with Craig to provide him with the benefit of our 65 years experience in the sport”.