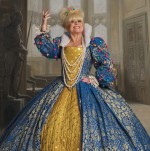 MERVYN KING lit up the Rileys Darts Zones UK Open with a nine-darter in the fifth round on Saturday night.

King became only the second player, behind Phil Taylor, to achieve a nine-darter at the Reebok Stadium, hitting successive 180’s and a 141 checkout in the 13th leg of his clash with the Scot.

"The nine-darter was fantastic but it was only one leg and sadly it didn^t win me the match," said King, who had hit a nine-dart finish in the Virgin Atlantic South African Masters last September and received a £5,000 bonus.

"This is my first nine-darter on TV with my new darts, but I’ve had quite a few in practice with them. It’s always a worry when you change your darts after a few years and I’m so happy that they’re better than ever."