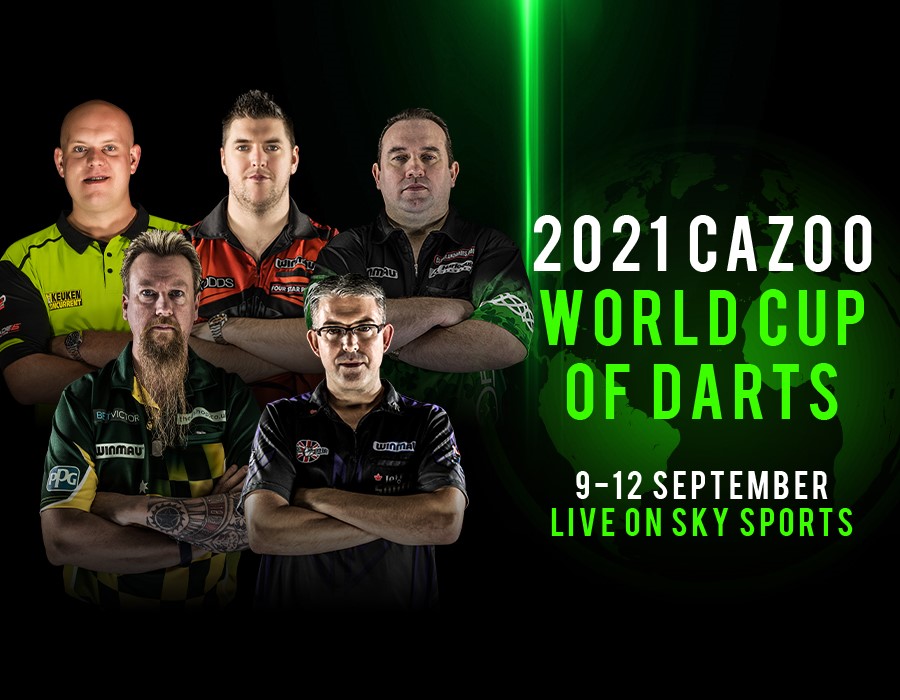 The Cazoo World Cup of Darts returns tonight from Jena, Germany with Simon Whitlock set to maintain his record of appearing at every edition of the tournament, partnering up with Damon Heta to represent Australia.

Northern Ireland’s Daryl Gurney and Brendan Dolan will make their 6th consecutive appearance at the World Cup, whilst three-time winner Michael van Gerwen once again represents the Netherlands with a new partner in Dirk van Duivenbode.

Jeff Smith returns to represent Canada for the third time in his career, entering as an unseeded team with Matt Campbell.

The annual 32-nation event will see two-player teams competing from September 9-12 at the Sparkassen Arena in Jena, Germany - featuring both Singles and Doubles matches during the four days.

Scotland will see Peter Wright and John Henderson team up this year, and the 2019 champions will play Chinese debutants Jianfeng Lu and Wenqing Liu.

The first round will conclude on Friday, with top seeds England being represented by the new pairing of James Wade and Dave Chisnall as they take on Brazi's Diogo Portela and Artur Valle.

Host nation Germany, for whom Gabriel Clemens and Max Hopp reached the 2020 semi-finals, drew Canada in a tasty tie as Jeff Smith and Matt Campbell renew a partnership which reached the quarter-finals last year.

2019 quarter-finalists New Zealand will not be represented at the World Cup for the first time due to the ongoing difficulties with international travel which means Ben Robb and Warren Parry will be unable to compete in Jena.

Following the first round on Thursday and Friday, the second round will be split across two sessions on Saturday September 11.

Sunday's afternoon session will feature the quarter-finals, ahead of the semi-finals and final in the decisive evening session.

The top eight countries are seeded for the draw, based on the lowest combined PDC Order of Merit ranking of the two competing players.