One of darts most popular players “The Dazzler “ joins Winmau 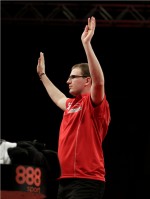 One of darts most popular players “The Dazzler “ joins Winmau

Winmau are delighted to announce the exclusive signature of one of the biggest most popular names in World darts - Darryl “The Dazzler” Fitton.

Darryl, the Manchester based star, Winmau World Masters finalist and Lakeside semi-finalist, has been working closely with Winmau’s development team to create his new set of signature darts that he will use on tour. The darts will be ready later in the year and will no doubt create a storm in the retail trade.

Simon Hall, Head of Marketing for Winmau, was delighted to have secured the deal, saying: “Darryl is easily one of the best players in the game and a huge favourite with darts audiences around the World. It is a real honour to have signed a player of his stature. I know there are lots of darts fans who follow Darryl, and his signature is a tremendous endorsement of our company”.

“The Dazzler” joins 6 World Champions at Winmau and he said of the deal: “I am really happy to have signed for such a massive brand as Winmau. I’ve always played on a Winmau dartboard and it is a great privilege to work with them in representing their equipment. I’m really focused on practicing and I’ll be working as hard as ever to claim a Lakeside World Champions title”.

Darryl has designed an amazing new set of darts, which will feature Winmau’s notable class-leading technology in tungsten production and match weighing to provide consistency every throw.