Jackpotjoy.com and Winmau extend their partnership until 2013 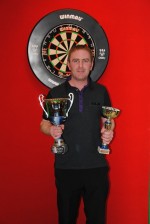 Jackpotjoy.com and Winmau extend their partnership until 2013

The Winmau Dartboard Company is delighted to announce that it is extending its agreement with Jackpotjoy.com as official shirt-patch sponsors for the BBC televised Winmau World Masters.

Jackpotjoy.com began their role as official supporters of the World Masters in 2006, and the new agreement secures their relationship with Winmau until 2013.

“We are delighted with our new Winmau World Masters agreement, because it is one of many successful initiatives for Jackpotjoy.com this year”, says Lee Fenton, Chief Operating Officer.

“In April we completely re-designed our website, and more recently we have created considerable impact with the launch of our major TV and marketing campaign featuring the legendary Barbara Windsor.

“She is now being seen in newspaper advertisements and TV commercials all over the country – changing her role as ‘Queen of The Vic’ in BBC’s Eastenders to Jackpotjoy.com’s very own ‘ Queen of Bingo’.”

“Having the bubbly ‘Eastenders’ icon fronting our nationwide TV and marketing campaign is a major and hugely successful coup for Jackpotjoy.com. It also marks a significant turning point for us, because we have traditionally focused our marketing activities to online audiences.

“Jackpotjoy.com has also enjoyed a long and successful relationship with the World Masters because we have always considered our Jackpotjoy.com brand to be the perfect fit for the sport of darts and its players. With over 1.5 million unique users, we share all the fun, competitiveness and social interaction that goes with darts – from both a players and supporters perspective."

Ian Flack, Sales & Marketing Director of Winmau says: “We are delighted that Jackpotjoy.com have extended their agreement with us, because we value our strong and ongoing links with such a successful, supportive and major sponsor.”

The Winmau World Masters, in association with John Smith’s and East Yorkshire Events, will be played at The City Hall, Hull from Friday, October 29th to Sunday, October 31st  with live and exclusive coverage from BBC Sport over the weekend of October 30th and 31st.