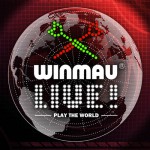 Winmau’s SIMON WHITLOCK won his fifth Players Championship title of 2010 with a 6-1 defeat of Dennis Priestley in Saturday^s event at the Citywest Hotel in Dublin.

The Australian, who picked up four wins in just over a month earlier this year, prepared in ideal fashion for next week^s Bodog.com World Grand Prix with the triumph over Priestley.

He was made to battle throughout the day, with three of his six contests going the full 11-leg distance, firstly against Hampshire^s emerging Arron Monk, secondly against Dutchman Roland Scholten in the last 16 and then against Justin Pipe in the semis.

Whitlock also overcame Tony Eccles and Andy Hamilton in his progression to the final, where he proved too powerful for Priestley.

Whitlock hit two 180s in a 12-darter to open the final, and missed the bullseye for a 170 finish in the second leg as double ten got the two-time World Champion off the mark.

However, Priestley was left waiting on 40 as Whitlock took the third, and the Aussie defied a 180 from the veteran to hit three 140s in a 12-darter to break and move 3-1 up.

Priestley missed two darts to steal the next and a further dart in leg six as Whitlock opened up a 5-1 lead, before landing a fourth 180 of the final in a 13-darter to seal the win.

"I^m delighted to win again and it^s a big confidence boost ahead of the World Grand Prix," said Whitlock. "Dennis is a great competitor - I hope I^m playing as well as him when I reach 60!"

Priestley had been bidding to claim his second title inside six weeks, having defeated Whitlock on his way to the Australian Open Players Championship in August.

He saw off Nick Fullwell, Paul Rowley, Vincent van der Voort and Louis Blundell in winning through to the quarter-finals, before edging out Ronnie Baxter 6-5 and then defeating Ian White 6-2.

Pipe^s run to the semis was his second of the year, following his success in Barnsley in June, and saw him whitewash Mark Lawrence and Matt Clark as well as see off Adrian Lewis and Dutch pair Michael van Gerwen and Co Stompe.

Runs to the quarter-finals for Hamilton, Stompe, Baxter and Tabern saw them warm up nicely for the World Grand Prix, which begins on Monday night.

Sunday sees a second £31,600 Players Championship held at the Citywest Hotel, with 105 players in competition.