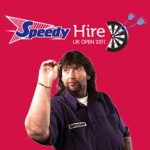 The Winmau World Masters and Lakeside International Play-Offs have attracted record entries this year, which means that their new home in Hull’s City Hall is just not big enough to accommodate all of the world-class darts at the same time.

"The record entries have given us a problem (albeit a nice one) but we have solved it by moving our ladies to the nearby Royal Hotel on both Thursday and Friday for the Lakeside International Play-Offs (October 28th ) and the Winmau Women’s World Masters (October 29th )", explains Olly Croft, Managing Director of BDO Enterprises Ltd.

"Rather than trying to squeeze everyone into the same venue (over 500 players are expected) we are accommodating our lady players in the Royal Suite of the hotel, which is within walking distance of the City Hall.

"I am certain that the ladies will be very comfortable and happy with the arrangements which the BDO have made especially for them in this beautiful hotel".

The International Play-Offs are to decide the final qualifying places (men and women) for the BDO’s Lakeside World Professional Darts Championships, which will be televised by BBC TV Sport from January 1st to 9th, 2011.

"The International Play-Offs and Winmau World Masters combine to bring a real festival of the very best in World Darts to Hull", adds Olly Croft, "and we are delighted to be bringing it to this city for the first time.

"In addition to the millions who will watch on BBC TV over Halloween weekend, we are looking forward to welcoming lots of local darts fans to see the very best in world darts at the City Hall."

Spectators can see the top men’s players, including No.1 Seed and double World Masters Champion Martin Adams, playing down to the Semi-Final stages on Saturday, and on Sunday there will be four finals: Women, Boys, Girls, and of course the BBC televised Men’s Masters Finals on Sunday.

To watch the ladies in the Royal Hotel on Thursday and Friday, the admission will be just £10 per person.