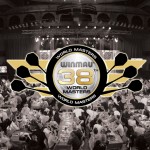 05 January, 2011
Winmau’s Mark Webster will make his debut in The Premier League Darts in 2011 after being confirmed amongst the eight-player field for the tournament.

Webster, who won the 2008 Lakeside Championship before joining the PDC, is rewarded for a fine run of form recently, which saw him lead Wales to the Cash Converters World Cup of Darts final before he knocked out Taylor in reaching the World Championship semi-finals at Alexandra Palace.

The league stage of Premier League Darts - which is screened live in its entirety by Sky Sports - will see the eight players face each other twice before the top four players progress to play in the Play-Offs at the Wembley Arena on Thursday May 19.
Prev Next
Popular