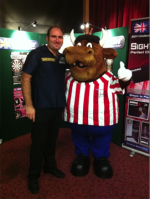 MARK WEBSTER produced a sensational performance to average 110 in powering past World Champion Adrian Lewis 8-2 in the 888.com Premier League Darts in Exeter.

Webster bounced back superbly from an 8-1 trouncing by Gary Anderson a week ago to leave Lewis reeling with his finest televised display.

The Welshman took out three ton-plus finishes in hitting eight doubles from ten attempts, and his average of 110.19 has only ever been bettered by Phil Taylor since the Premier League began in 2006.

Lewis played his part in a fine contest, sharing the opening four legs before Webster took six in a row to power to victory.

Webster began the game by holding throw twice with checkouts of 101 and 120, with Lewis replying by finishing a showpiece 80 of two double tops and a 93 finish for a 12-darter.

Lewis, though, missed the bullseye for a 161 finish in the fifth to break, as Webster took out 124 on double 11 before breaking throw himself on double top for a 13-darter, in a leg which featured his first maximum of the game.

Webster matched that with another 180 and tops for a 5-2 lead as he took another leg with his first dart at a double to maintain a 100 percent finishing record.

The Welshman erred for the first time in the eighth leg, but hit double ten at the third time of asking to lead 6-2, before trading 180s with Lewis in hitting a 12-dart finish to a leg away from the win.

Lewis hit another maximum of his own in the next, but three ton-plus scores left Webster on 96 after only nine darts, and he took out the finish in two darts to wrap up a brilliant victory.

"I was atrocious last week but this performance has put that well and truly behind me," said Webster. "I froze last week and I knew I had to put it right, and there^s no better way to do that than beating the World Champion."

Webster, meanwhile, produced his best-ever televised average at 110.19 in a brilliant 8-2 demolition of World Champion Adrian Lewis, which included finishes of 124, 120 and 101.

The Australian followed up last week^s defeat of James Wade with an impressive victory in Exeter, hitting four 180s and 40 percent of his chances at a double to celebrate his 42nd birthday in style.

The defeat was Jenkins^ third in succession as he was restricted to just four darts at a double during the contest, with Whitlock showing his intentions from the start by opening with an 11-dart leg.

Jenkins missed two darts to break back in the second to allow Whitlock back in on double ten, and the pair traded 180s in the third before the Englishman took out 76 on double top to get off the mark.

Whitlock, though, took the next for a 3-1 lead before breaking again in the fifth leg, hitting a 180 and double 16 for a 13-dart finish as Jenkins paid for one miss at double 11 for a 124 checkout.

Double ten gave Whitlock the next two legs either side of the break, and double five put him 7-1 up to pile on the misery for Jenkins.

Whitlock then kicked off the next with a 180, giving him the advantage to post double top in completing the win.

"It^s a second successive win for me and I^m pretty pleased with that," said Whitlock. "I wanted to have a big win and I managed to do that.

"I broke him early on and it gave me the momentum to go on from there."