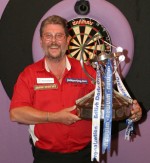 The BDO WINMAU WORLD MASTERS, in association with John Smith’s and East Yorkshire Events, will be played for the first time at The City Hall, Hull from Friday, October 29th to Sunday, October 31st and will be the richest two-day tournament on terrestrial TV.

The total prize fund is being increased to a record-breaking £66,500 and there will be extensive BBC-1 and BBC-2 coverage over the weekend of  Saturday, October 30th & Sunday, October 31st.

The last sixteen players in the Men’s World Masters (including the eight top ranked BDO players) are guaranteed a minimum of £1,000 each as  reward for reaching the BBC televised stage finals, with the 2010 Winmau World Master receiving a cheque for £25,000.

Staged and promoted by the British Darts Organisation (BDO) the second major darts tournament of the year on BBC television is moving to Hull due to the hugely popular and recently renovated Spa Bridlington being unavailable on the dates scheduled by BBC Sport.

Among the top players competing will be England’s MARTIN ADAMS, the reigning and double World Masters Champion (2008 & 2009) and reigning 2010 Lakeside World Professional Champion. He headlines an International field of top players – men and women – competing for one of the most coveted and prestigious titles in world darts.

“While East Riding of Yorkshire Council and East Yorkshire Events are disappointed to lose the Winmau World Masters from The Spa Bridlington, they are delighted to have secured the City Hall, Hull for the 2010 Championships. “Utilising our close links with Hull City Council we are sure that our dynamic partnership will showcase this enormously successful event to an even wider audience than ever before.“Importantly it means that East Yorkshire Events retains the Winmau World Masters in the East Riding of Yorkshire and continues its commitment to bring top class International events to our region and further enhance the reputation of East Yorkshire Events at the very forefront of event delivery.”

"We are delighted to welcome the 2010 Winmau World Masters to HullCity Hall – it is yet another exciting addition to Hull^s sporting and events calendar. "Importantly, it provides a fantastic opportunity for us to work in partnership with East Riding of Yorkshire Council and the British Darts Organisation, andintroduce people from all over the world to our City. We are in no doubt that darts fans new and old will enjoy the World Masters in Hull."

Olly Croft, OBE, founder of the BDO and Managing Director of BDO Enterprises Ltd says: “We are thrilled to be staging the World Masters at Hull’s City Hall for the very first time, with BBC Sport once again providing us with the optimum amount of coverage on both Saturday, October 30th and Sunday, October 31st. The Masters always enjoys excellent viewing figures and we are looking forward to welcoming  Yorkshire darts fans to the City Hall over the weekend.”Ian Flack, Sales & Marketing Director of Winmau says: “The move to a bustling and energetic City like Hull is very exciting and I would like to thank John Smith’s and East Riding of Yorkshire Council for their valuable ongoing support. We must also thank Hull City Council for their support, and it is also a great pleasure to have Jackpotjoy.com as our official shirt patch sponsors for the third consecutive World Masters”.

The BDO Winmau World Masters is a true World Championship with players from seventy-two countries being invited, including singles darts champions from over 300 national and international singles events worldwide.

In addition to players from the home countries of England, Scotland, Wales and Ireland, approximately 400 players from most European countries, and as far away as Australia, America,  China and India, will converge on Hull for this year’s World Masters, which will mark the 37th anniversary of the oldest established major in world darts (1974-2010).

MARTIN ADAMS successfully defended his Winmau World Masters crown with a stunning comeback in the BBC televised 2009 final against his England team-mate ROBBIE GREEN. After going two sets down at the beginning of the 13 set final, many thought he was out of it when Green went 6-3 up after the interval.  However, a rejuvenated Adams then won the next four sets to retain his title with a 7-6 scoreline.

He has now joined an elite band of players who have won the famous World Masters title in two successive years, and is the reigning 2010 Lakeside World Professional Darts Champion.

THE BDO WINMAU WORLD MASTERS is the oldest established major darts tournament in the world and second only in importance to the BDO Lakeside World Professional Darts Championships.

It was first played in 1974 and the 2010 Masters will celebrate thirty-seven consecutive years of  Winmau World Masters darts.

The live BBC televised Men’s Masters features the top eight ranked players in the BDO Invitation tables – guaranteeing the top players being on stage as an attraction to both venue and TV audiences.

This ensures the seamless link between the two BDO televised majors and clearly illustrates their importance to World darts and to the top men and women players around the globe.

An additional highlight of the world-class darts on offer at the City Hall will be the International Play-Offs for the Lakeside World Professional Championships (Men & Women) when an estimated three-hundred players will compete for the remaining places in the 2011 Lakeside World Professional Darts Championships to be played from January 1st to 9th, 2011 and televised for nine consecutive days by BBC TV Sport.