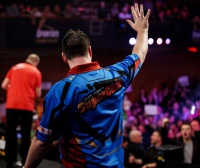 Some of the world’s best players will be descending on the Dutch coastal town of Egmond aan Zee tomorrow to take part in the Finder Darts Masters – The prestigious Dutch event that is played exclusively on Winmau Blade dartboards.

Winmau TV will be broadcasting 3 days of coverage LIVE and for FREE.

This BDO ranking tournament is a title all players want to win and it plays an important part in the run in to the Lakeside World Professional Championships in January.

The Women’s event comprises two groups of three players, each with a seed. In addition, the youth event will contain six players.

For a full list of participants and for further information, please visit: http://www.findermasters.nl/?page_id=634

England’s Glen Durrant will be looking to win the title for the third year running despite not being seeded. However, number two seeded, Geert de Vos, who is drawn in the same group as ‘Duzza’, will be aiming to stop him.

For the women, number one seeded English player Deta Hedman will be looking to regain a title she first won in 2011.

Tune in to Winmau TV (http://www.winmau.com/sec/1391/WINMAU_TV/) to catch all the action live and for free (times are UK and may vary):

The playing schedule can be found here: http://www.findermasters.nl/?page_id=1235