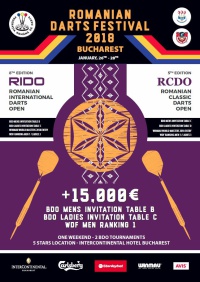 The Dutch Open is the largest open darts tournament in the world, and the finals will be broadcast LIVE and FREE across the globe thanks to Winmau TV! Lakeside World Championship finalist Mark McGeeney and Deta Hedman will be looking to defend the singles titles they picked up 12 months ago.

The event takes place on the weekend of the 2nd to the 4th of February from De Bonte Wever in Assen, the Netherlands and will be played on the class-leading Blade 5 dartboards.

All the action from the finals on Sunday 4th February will be broadcast live and for free by Winmau TV: http://www.winmau.com/sec/1391/WINMAU_TV/

Viewers in the Netherlands can either watch via Winmau TV or RTV Drenthe and the winners will also qualify for the 2018 Winmau World Masters, the world’s longest running darts major.

This year has seen another huge increase in registrations for the tournament with a total of over 5,700 entrants (5,113 players attended in 2017). This includes a record number of over 3,000 men for the men’s singles competition and also 31 darts players taking part in the first ever disability tournament at the event.

The Winmau range is available nationwide in the Netherlands via their distributor K Sport Supply: Email: ksportsupply@telenet.be, telephone:  +32 3771 3897, website: www.ksportsupply.be