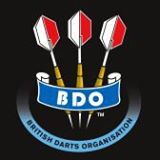 The men^s final of the was a very high-level match, McGeeney started strong and took the first set 3-1. The second set seemed to be going Durrant^s way after he was 2-0 up. McGeeney, however, battled back and grabbed that set to get a 2-0 set lead. In the fourth set we saw four breaks of throw, which left McGeeney to throw for the game. He started that leg 140, 180 and after two missed match darts, he hit the third.

The final of the ladies seemed to be a pretty one sided encounter, Aileen de Graaf took a 3-0 and 4-1 lead and had three darts for the game at 4-2, but missed. One leg later, the Dutch got another chance to win the game. This time she had six darts, but again she couldn’t hit the final double. Hedman equalised and won the deciding leg to once again be named Ladies Dutch Open Darts champion.

Wesley Harms and Richard Veenstra defeated Yoeri Duijster and Dave van der Zande in the men^s pairs tournament. The surprising finalists, Duijster and Van der Zande, took a 3-1 lead in the final, but eventually lost 5-3. Harms and Veenstra missed seven match darts before they hit the final double. Among the ladies Lorraine Winstanley and Corrine Hammond were the winners. They defeated Trina Gulliver MBE and Paula Jacklin, who eliminated the defending champions De Graaf / Prins in the semi-finals.