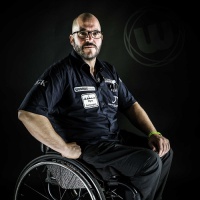 SIMON WHITLOCK is on a flight of fantasy at the top of the Unibet Premier League…all thanks to a DREAM.

The Wizard of Oz is the early pacesetter after emphatic wins against Mensur Suljovic and Rob Cross in the opening fortnight.

It’s a far cry from the nightmare of four years ago when he was relegated after week nine, picking up just three wins.

He revealed: “Honest to God I had a dream the night before Cardiff last week to cut my flights, to take the top of the flights off. I did it and it worked. I need to dream up something new every week!

“I feel fantastic, it wasn’t a great game last week against Rob but I got the job done.

“I think Rob’s got a bit of a hangover from winning the Worlds, he’s under a lot of pressure but I feel a bit bad for him but I’ve got to do my job!

“He’s a class player, he’ll bounce back but luckily it’s not against me.

“The first job for everyone is avoiding elimination and then pushing for the Play-Offs. I^m looking forward to it and it^s been a fantastic start for me so far.”

It’s been a rollercoaster decade for the beard to be feared. He roared into the limelight by reaching the 2010 World Championship final where it took a terrific fightback from Phil Taylor to deny him the title.

Whitlock then followed that up with runner-up in the Premier League two years later, again going down to The Power.

Then saw a dramatic fall from grace with two successive first round exits from the Worlds in 2015 and 2016.

But the plucky Aussie has bounced back big style and is loving every minute of being back in the Premier League spotlight.

He added: “As long as I win the matches I^m happy, and the averages don^t mean a lot.

“I^m there at the top at the moment but there^s a long way to go yet. I^ve got to take it one week at a time but so far, so good, and I^m very happy.

“I couldn^t have asked for a better start. I think every other year I^ve been in the Premier League I started off slowly, but this year I^m off to a flier and I can^t wait for Newcastle.

“Michael Smith and me are playing well, and we^re just doing our job and playing good darts. It^s open, anybody could win this Premier League. Michael van Gerwen^s still favourite, obviously, but don^t discount the newbies.