Winmau Stands by Danish Star as she Bids to Make Comeback 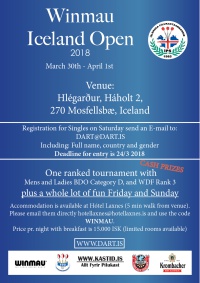 Winmau Stands by Danish Star as she Bids to Make Comeback

Winmau, the world’s leading darts brand, has reaffirmed its support of Michelle Lindhardt, one of Denmark’s top darting prospects, by extending a sponsorship deal for a further two years as she bids to make a comeback to big-time darts.

Lindhardt, who attended the youth Danish Dartschool in 2010 only to be picked for her national team the following year, was forced to stop playing tournament darts in 2015 following the onset of dartitis. She then had to cope with the tragic loss of her mother in 2017.

It was a crushing double blow for Lindhardt whose progression at the sport’s top level had been spectacular. A year after being picked to play for Denmark she represented her country in the European Cup, won every Danish national title in 2012 and was the top ranked player in her country for three years running.

Her biggest darting achievement came in 2014 when she won the Dutch Open. It was a bitter sweet moment though as the win not only resulted in her joining Team Winmau but saw the early onset of dartitis.

“It started just before the tournament, but I managed to battle through,” Lindhardt recalls. “However, it got progressively worse and I had to stop playing after The Danish Championships in 2015, despite being the top ranked player at the time.

“I’ve spent the last few years working hard on my game and progress has been steady. I am ready to return to competitive darts and intend to play for Royal – my club – in the Danish Third Division this year. When my throw is 100 percent back to normal I will start playing tournaments again and hope to compete in the Winmau World Masters and Lakeside world championships.

“I honestly can’t believe that Winmau have stood by me during this difficult time in my career, and I will always be grateful for their support and faith in me.”

Ian Flack, Winmau’s Sales and Marketing Director, added: “Michelle has had an incredibly tough few years. On top of her struggle with dartitis, her mum passing away was a terrible blow. She is an incredible talent and her refusal to give into dartitis is indicative of her strong character. We are all very proud of Michelle. She exemplifies the qualities we value at Winmau and is a role model for all young players.”