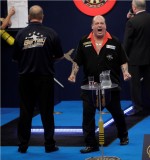 Winmau’s Sales and Marketing Director, Ian Flack, said "For the first time the Winmau brand exclusively partner the SDF, and the World famous Winmau Blade 4 will become the dartboard of choice of the SDF. We are delighted that the SDF have chosen our proposal in the face of several courting parties.  Anyone who’s experienced Winmau products will know we have the highest attention to detail for our tournament approved dartboards, which will greatly benefit the players in Sweden. Our Swedish partner, Dart Experten, was instrumental in the negotiations and we thank them for all their help and support".

Winmau and the SDF will work closely together for the next 5 years to promote the game of darts right across the growing Swedish Market. Winmau will cross-promote all Swedish news via its web marketing and digital marketing channels.

The sponsorship deal comes at a time when the sport has announced a series of fantastic new ventures by screening World Darts Federation events across Europe via multiple satellite stations to improve the European coverage of the sport of darts.