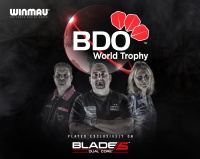 21-year old debutant William Borland booked his place in the next round of the BDO World Trophy by upsetting Conan Whitehead 6-1. The youngster took 5 consecutive legs, posting a 91.86 average on the way to the win on his impressive big stage debut.

Dutchman Wesley Harms opened the evening with a win over Wayne Warren. “Sparky” defeated Warren convincingly despite Warren hitting  a 116 to keep in touch during the early exchanges. Fallon Sherrock also knocked out another Wales representative in the form of Rhian Griffiths in the next match of the evening. Sherrock recently picked up a double haul of trophies in Bruges and showed her big stage experience to overturn a 2-1 deficit into a 4-2 win.

Michael Unterbuchner was the next unseeded player to knock out a seed as he defeated Dean Reynolds 6-1. The German showed the class that got him to a Lakeside World Championship semi-final in January, finishing the evening with a 6-1 win over Reynolds.

Winmau’s Trina Gulliver MBE was narrowly edged out by the Netherland’s Anca Zijlstra 4-3. Both women stuttered at the start of the match before getting into their rhythm. Zijlstra took full advantage of throwing first to win the match as every leg went with throw. Mark McGeeney and Chris Landman put on an excellent exhibition of darts. McGeeney stormed into a 4-0 lead before Landman clawed it back to 4-4. McGeeney then held his throw to move 5-4 ahead before breaking the Dutchman’s throw to win 6-4.

Number One seed Lorraine Winstanley comfortably defeated Lincolnshire Ladies Caption Paula Jacklin 4-1. The Winmau World Master posted a 76.77 average and will now take on Anca Zijlstra in the next round. Jim Williams closed out the evening with a 6-3 win over Derk Telnekes as another of the Dutch hopefuls left the tournament. William Borland now awaits Williams in the next round which is sure to be a fantastic clash.

The World Darts Trophy continues tonight from 7.00pm UK time as the Ladies and Men’s opening rounds conclude. Apologies to any Winmau TV viewers that may have been redirected last night, but we are told by the production company that the technical issues have been resolved for tonight.

Darts fans outside of the UK can watch every game LIVE and FREE via Winmau TV. Viewers in the UK will be able to watch via free-to-air channel FreeSports (Freeview (95), Sky (422), FreeSat (252), Talk Talk (95), BT Vision (95) and the streaming service TVPlayer).