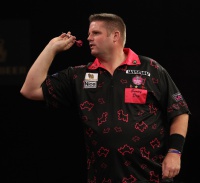 The England Captain came through a tough field on the south coast, narrowly besting Dave Parletti 5-4 in the semi-finals to set up a final with Martin Atkins.

Scotty Dog showed his pedigree in the final, defeating Martin Atkins 6-3 in front of a fantastic crowd at the Bunn Leisure Holiday Centre.

Mitchell will now return to Selsey this weekend to captain England in the Six Nations as they kick-off their campaign against the Netherlands and Northern Ireland.

In the Ladies tournament, Fallon Sherrock continued her rich vein of form over the last couple of months by claiming the title.