Murschell Completes Another Giant-killing Against Price 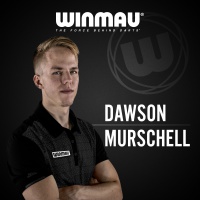 Murschell Completes Another Giant-killing Against Price

Awesome Dawson Murschell became the serial giant-killer with another massive scalp in the US Darts Masters.

The Canadian, who dumped James Wade 12 months ago, this time KO’d another big name Gerwyn Price in Friday^s first round at the Mandalay Bay Resort & Casino.

This time he came from a leg down to lead 3-1 with the aid of a 96 finish, and also took out 86 as he went on to complete another memorable win with a 6-2 success.

Murschell said: “I^m really happy to get through, and I love Las Vegas. I had a couple of bad legs but my timing was good. Last year I came in and wanted to win my first round, but I^m here to win the whole thing this year.

Murschell now faces two-time World Champion Gary Anderson, who hit five 180s and an outstanding 112.63 average in his superb 6-1 win over American ace DJ Sayre with the stand-out performance of the first round.

Ando said: “It can only get worse from here. But seriously I’ve had four weeks off and not thrown a dart in that time.

“It’s strange my mind and body doesn’t feel like I’m standing or throwing right, it’s hard to explain but they are going in.

“Now it’s Dawson and he’s a good kid and beaten two big names. He’s come over to the UK and he’s well looked after, should be a good game.

“I never count my chickens, I’d like a Vegas title but we’ll see how it goes.”

Canada^s Smith had won Thursday^s North American Championship, but was brought back to earth with a bump as Van Gerwen averaged 101.33, restricting his opponent to just three darts at a double.

MVG said: It was a good start for me. I took my chances and did what I had to do to win this game. Jeff is a good player but he couldn^t do something special like he did yesterday.

“There are no easy games, especially in the short format, but now the formats get longer and I^ll be more in my comfort zone. I know I can do even better than this and I need to make sure I keep focused.”

After losing to Murschell a year ago, Wade had another major giant-killing scare, beating Danny Lauby in a deciding leg with a 158 checkout.

American left-hander Lauby defied a 141 checkout from Wade by taking out 120 and 101 as he opened up a 5-3 lead, only to miss double top and ten to claim the biggest win of his fledgling career.

After snatching leg nine, Wade landed six perfect darts with two 180s as he levelled the game, before sealing the win with a brilliant 158 finish in the decider.

Wade admitted: “I must bring out the best in players. He played really well - I didn^t play badly but I hit some fortunate finishes and he missed some finishes. I^m happy to go forwards.”

Cross added: “It was a decent start and I^ve really been looking forward to this. I feel happy with myself at the moment and I^m playing well.”

Cross opens the final day with a quarter-final tie against Premier League runner-up Michael Smith, who also dropped just one leg during his victory over another Canadian, David Cameron.

Peter Wright was forced to work hard before finally seeing off America^s Joseph Huffman 6-4 in their first round tie.

The carpenter from Maryland led three times, but crucially missed his chance to open up a two-leg lead in the sixth leg, as Wright levelled and then edged himself ahead before closing out the win.

Wright now meets 2017 US Darts Masters finalist Daryl Gurney, who took out finishes of 101 and 145 as he overcame early resistance from Canada^s John Norman Jnr to take a 6-2 win from their tie.