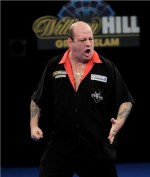 SIMON WHITLOCK is aiming to take revenge on Raymond van Barneveld when the pair meet in the 888.com Premier League Darts in Aberdeen on Thursday.

Van Barneveld produced one of the Premier League^s finest displays when the pair met in Nottingham in the second week of this year^s tournament, hitting four ton-plus finishes in an 8-3 defeat of Whitlock.

The Australian, though, could move level with van Barneveld on ten points in the Premier League table with a victory at the AECC in their clash.

"He was ruthless the last time we played - every time I hit a 180 he went out on a massive finish," said Whitlock. "Raymond was brilliant on that night and he^s having a good season.

"I^ve got a good record against him and I^m confident going into it. If I can get a win it can put me in the top four, and that^s where I want to be at the end of the season to make the play-offs."