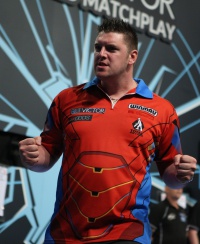 Blackpool’s iconic Winter Gardens will once again play host to the World Matchplay from 21st-29th July. The tournament features a £500,000 total prize fund including £115,000 for the player crowned champion.

Team Winmau’s Daryl Gurney, Steve Beaton, Simon Whitlock and Mervyn King have all claimed their qualification places. The field of play is made up of top 16 players on the PDC Order of Merit and the top 16 unqualified players on the ProTour Order Merit.

World Grand Prix Champion Daryl Gurney will kick-off his tournament against Steve West on Sunday Afternoon’s session. Superchin has rocketed up to World number 5 over the last 18 months and a run to semi-final, losing narrowly 17-15 against Peter Wright, in last year’s competition aided his rise.

Australian Simon Whitlock also previously reached the Semi-final of the event in 2010 and 2014, a good run in this year’s tournament will cement a place for the Wizard in September’s Champions League of Darts. First opponent for Whitlock is close friend Richard North, who he defeated 3-0 in last year’s Grand Prix.

Mervyn King faces a stern test in his opening match on Sunday, World Champion Rob Cross. The King boasts a 3-2 winning record over Voltage and most recently edged the World Number 3 in Danish Open 6-5.

The Bronzed Adonis - Steve Beaton will once again grace the Winter Garden stage for the 19th consecutive year with his effortless class. Beaton plays recent Danish Open and German Darts Masters winner Mensur Suljovic in the opening round of Sunday’s evening session.

The full tournament will be broadcast on Sky Sports across 21st-29th July and via PDC-TV for Rest of the World viewers.

Full details of the event are available at: https://www.pdc.tv/betvictor-world-matchplay