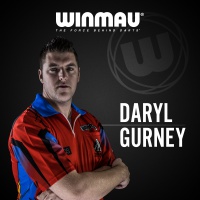 Northern Ireland’s Daryl Gurney survived a dramatic 11 match darts against Steve West to defeat the Englishman 12-10 last night at the BetVictor World Matchplay. West lead during the whole contest but Gurney kept his nerve to stay in touch and nick the late victory.

The pivotal moment in the match came as West was sat on double top for the win, Gurney closing out 92 on the bull to level 10-10. Superchin picked up his scoring to hold his throw and lead for the first time at 11-10, West then spurned 2 darts at double as Gurney broken his throw on double 16 to secure a last-16 tie with Joe Cullen.

It was a much different story for Cullen as he comfortably saw off Premier League star Gerwyn Price 10-3. Price is set to undergo surgery on an Achilles injury next week and it was clear to see the Welshman was struggling with his game. Cullen’s sharp finishing throughout the early stages in the game, including a 170 checkout, ensured a 5-0 lead at the break before staving off a late fightback from Price.

Darts icon Steve Beaton made his 19th Matchplay appearance last night, but saw his 100% record against Mensur Suljovic ended. The Bronzed Adonis kept pace well with Austrian’s scoring in the early exchanges, but finishes of 120, 124 and 112 from Mensur saw him pull ahead into a 6-2 lead before securing a 10-6 win.

Mervyn King found himself on the wrong end of a 10-5 result as he faced Rob Cross. The King has had a fantastic resurgence of form in recent months and looked in great health on the Winter Gardens stage, taking an early 3-2 lead. However after the interval World Champion Cross kicked into the form that has seen him reach two consecutive World Series of Darts finals and close out the victory.