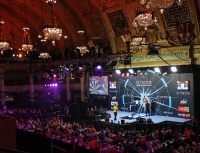 Night Four of the BetVictor World Matchplay was packed with drama and shock results in Blackpool last night. Jeffrey De Zwaan continued his impressive debut with an 11-9 victory over former finalist Adrian Lewis.

The Dutchman had to hold out from concerntrated pressure from Lewis in the form of a 103.86 by the Englishman. De Zwaan kept his nerve well on his finishing, breaking into an early 5-1 lead before Lewis rallied. The winning leg saw “The Black Cobra” take out a show piece double-double finishing to secure his place in the quarter-finals.

Dave Chisnall completed the comeback of the tournament so far as he battled back from 7-1 down to win 11-8 against Premier League finalist Michael Smith. Chisnall smashed in a 103.02 average, hitting an impressive 10 maximums and 47.83% of his doubles.

Winmau’s Daryl Gurney crashed out at the last-16 stage after losing to another confident display from Englishman Joe Cullen. Gurney couldn’t get into his scoring rhythm during the match and was punished by a near ton average from Cullen who was on lethal form with his doubles. After a tight early exchange that saw the pair level at 3-3, Cullen rattled off 8 successive legs to book a place against Gary Anderson in the last 8.

The final match of the evening also saw some fireworks on stage as former World Champions Raymond van Barneveld and Gary Anderson faced off. It was Barney that started the quicker, firing himself into a 5-1 lead before Anderson began playing some of his finest darts. The Flying Scotsman averaged a huge 104.17 as he took out number 13 seed RvB 11-9.