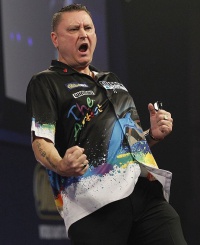 This deal signals an extension to Painter’s initial contract that saw him first join Winmau back in 2015, lining up alongside a host of global darts professionals and World Champions.

Kevin said, “It’s fantastic to sign this extension and continue to work with the team at Winmau. The last three years have been a great experience for me and it was a no-brainer to re-sign with the company. There’s no brand that supports their players better than Winmau in the industry and nothing is ever too much trouble for them! Winmau’s constant desire for innovation and attention to detail really opened my eyes when I initially joined in 2015 and I’m proud to represent them at tournaments and exhibitions across World.”

Ian Flack, Winmau’s Sales and Marketing Director, said “Kevin’s always been an iconic player throughout world darts. His colourful personality and grit on the oche really makes him one of the most influential players in recent darts history. We’re absolutely delighted to renew Kevin’s contract, to continue with him on his darting journey and to draw upon his vast experience to assist in future product development.”