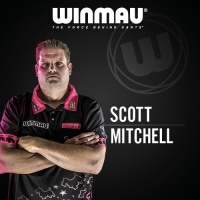 Scott Mitchell defeated Wayne Warren 6-1 in a convincing final display to win the Vizcaya Open men’s singles on Saturday. The Englishman enjoyed a strong run of form throughout the tournament after a recent 6 week break.

Mitchell defeated Chris Landman 5-0 and Lakeside World Championship semi-finalist Michael Unterbuchner 5-2 on his run to the final before comfortably triumphing over Wales’ Warren.

Trina went a step further in the mixed pairs as she took the title with a 5-3 win with partner Dan Nicholls over Anca Zijlstra and Dean Reynolds.