Webster wins despite being hit with Part 9-Dart 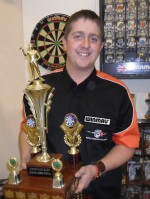 Webster wins despite being hit with Part 9-Dart

A SENSATIONAL nine-dart finish from John Part came in vain as the Canadian lost 10-8 to Mark Webster in the Sky Bet Mobile World Matchplay on Saturday night.

Part became just the third player to hit a perfect leg in the 18-year history of the World Matchplay, as he hit scores of 180, 180 and a 141 finish in the 11th leg of the clash with Webster.

He had trailed 7-1 but the nine-dart finish came in a fight back as he pulled back to just 8-7 at one stage before Webster held his nerve to take victory and progress to a second round clash with Steve Beaton on Wednesday.

Part, though, had found himself punished for a slow start to the game as Webster took an early 4-0 lead, with the Canadian missing doubles in two legs as the Welshman broke twice in the opening stages.

Part finished double 16 to finally get off the mark in the fifth leg, but after hitting a 180 missed further doubles as Webster capitalised.

He hit double 16 to lead 5-1, and after finishing 116 for a sparking 12-dart leg he then landed double six for a six-leg cushion, following three further misses from the Canadian at double 18.

Part had hit just one double from 16 attempts in the opening eight legs, but checkouts of 105 and 76 saw him pull back to 7-3 at the break, before he returned to land his brilliant nine-dart finish.

He also took the 12th leg, although that came in scrappier circumstances than his previous perfect leg as he posted double five with his final dart after Webster missed nine darts at doubles.

Webster, though, crucially hit two 180s in the next as he edged just one leg from victory at 9-7.

When he missed the bullseye for the match in the next, Part hit double 16 to evoke memories of Webster^s semi-final loss to James Wade in the UK Open a month ago, when he allowed a lead to slip.

However, there would be no repeat as Webster hit a 171 score to leave a finish, and he hit double top to secure victory.

"It wasn^t a brilliant performance but I just needed to get through it and I^ve done that," said Webster. "I was a bit nervy and I didn^t feel great up there, but I^ve got through.

"I need to improve but I^m still in the competition. The first round^s always tough but John gave me chances and I took them early on.

"His nine-darter was as sweet as a nut, and because I was a long way back in the leg I was willing him to hit it. It was a brilliant nine-darter and it^s great to see John back.

"When he came back at me I started flashing back to what happened in the UK Open but I held myself together. I wasn^t bothered about my average or my performance, just getting through, and I^ve done that."

Part - who would claim a £10,000 bonus should no other player hit a nine-darter in the remainder of the event - said: "For a player who^s been around a long time and been acknowledged for a lot of achievement^s it^s great.

"Some other guys hit nine-darters all the time but I^m a three-time World Champion and I hadn^t had one, so now I^m in there too and it^s nice.