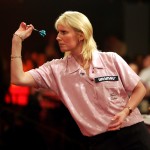 In the high-scoring Men’s Final, Dean Winstanley checked out on 91 for the opening leg and went on to win the first set with d-10. Not to be outdone Garry Thompson checked out on 104 for the 1st leg of the 2nd set. But Dean won the second leg and then the set with an outstanding 143 checkout for the match and the Winmau British Classic title.

Equally impressive was the Women’s Final, with Trina Gulliver recording a 24.69 single dart average and Lorraine Farlam a 24.47 average. Trina won the opening leg and Lorraine opened the 2nd leg with a 140 and 180, only to see Trina go 2-0 up. Lorraine halted the Gulliver charge by taking the third leg. However, it was Trina who finally took her sixth Winmau British Classic title with d-6.