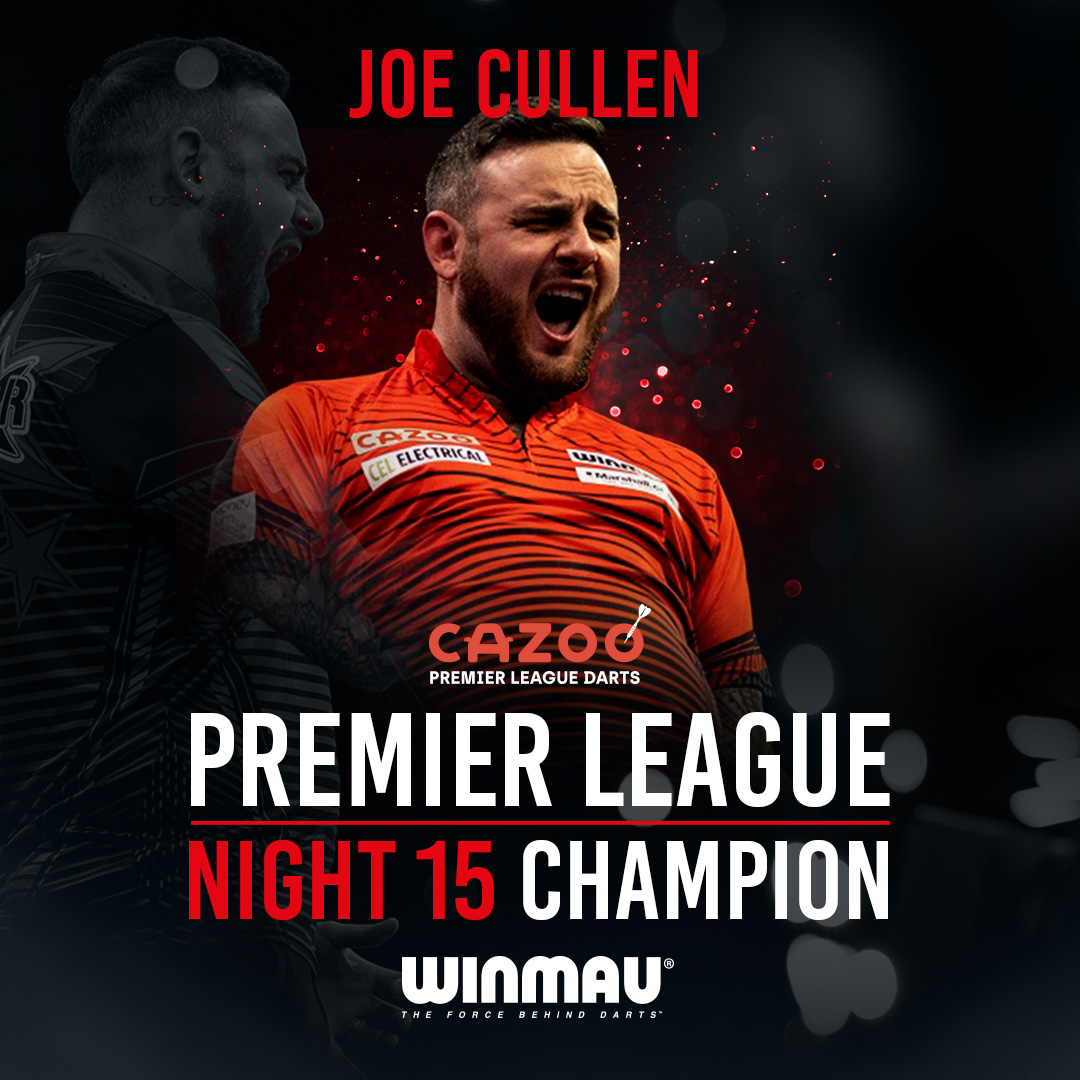 Joe Cullen moves into the Play Off places after beating league leader Jonny Clayton 6-4 at the O2 Arena. Three maximums and a 93.04 average were enough for Cullen, as he found a 62 checkout in the final leg to knock Peter Wright out of the top four for the very first time in the competition with a better legs difference, as one week to be played until Finals night.

Clayton included a 144 checkout on double 12 in the ninth leg to keep his chances in the match alive, but it was to be Cullen’s night in his home capital as he found double eight on his last dart to finish 62 and win his second night of the competition, to move ahead of Wright into the Play Offs. The two will meet in a winner takes all match in Newcastle next week for the right to join Clayton, MVG and Wade in Berlin.

Jonny Clayton confirmed top spot in this year’s competition after beating Michael Smith in the Semi Finals, after Michael van Gerwen lost to Bully Boy in a last leg decider earlier on in the night. James Wade qualified for the Play Offs after Price lost early on as his nearest challenger before a dart was thrown.

World number one Peter Wright won his first Quarter Final since Aberdeen after beating James Wade 6-3 in the third match of the night in a convincing win for the Scotsman, with Wade only averaging 80.74 in the capital.

The world number two is yet to win the Premier League and will have to wait another year after falling to defeat in London, with his compatriot and world cup partner finishing double eight on his second dart to prevail to another night Semi Final.

Michael Smith did all he could in what was a very slim chance of making the top four with two league weeks left, after clinching a last leg decider over Michael van Gerwen. Mighty Mike was in search of top spot, a position he has filled in eight of the last nine years of the competition. Despite a higher average, a poor opening to the game cost van Gerwen after Smith moved into a 5-2 lead after leg seven.

Bully Boy included two maximums with van Gerwen likewise, but it was Smith who prevailed finding double sixteen on his second time of asking to prevail in London. Five-time winner van Gerwen included an impressive 145 checkout in the eighth leg to hold throw, before breaking in the next leg to apply pressure to the Englishman on the oche.

Peter Wright convincingly won his first game since Night 11, after beating James Wade 6-3 in the third QF tussle on Night 15. Snakebite missed the weekends action to gain some rest, in what is a jampacked darting calendar with three early exits in his last three Euro Tour appearances. It seemed to do the trick with a maximum and a 116 checkout in leg eight to hold throw.

The World Number 1 also improved massively on his record on the outer ring, recording a 46.15% checkout rate. Wright found double twelve on his first time of asking in the ninth leg to send Wade packing who despite defeat, qualifies for Berlin with just one spot now left to be decided.

Joe Cullen received a much needed two points in his bid for a top four finish, convincingly beating bottom of the league Gary Anderson 6-1 on the London stage. The Rockstar hit four maximums and included an 81 checkout in his highest of the match, as he also hit an 80 out to break Anderson in the second leg of the match and lead 2-0.

Gary Anderson is playing for pride now in the league, with it mathematically impossible for the Scotsman to make the top four with just nine points to his name and one week left to play. World number 11 Cullen closed out victory in the capital on tops to sink Anderson to another Quarter Final defeat.

Jonny Clayton reached the Final in London, after brushing aside Michael Smith in the first Semi of the night to finish the league format in top spot. Michael Smith saw his slim hopes of making the top four fade away after falling to a 6-4 defeat at the hands of the league leader. The Welshman only missed one dart at double on the oche again showing his magnificent ability on his doubles.

The Ferret averaged 97.16 on the oche and included a shanghai finish in the fifth leg to hold throw, with the match not including a break until the seventh leg. Smith showed his inability on some occasions to not find a double, and it cost him in the last leg missing three darts at the outer ring allowing Clayton to the Blade 6 to finish double ten on his last dart, as he tops the table for the first time in his second year in the Premier League.

Peter Wright saw Joe Cullen close the gap on him in the race for the Play Offs, after the Rockstar achieved his second 6-1 victory of the night. The Englishman threw the two only maximums of the tie, and only missed three darts at the outer ring with 66.67% on his doubles.

Cullen included a 105 out in what was the highest checkout of the match in the opening leg, which broke the Snakebite throw. The Masters champion found double sixteen on his last dart to move a point closer to the play offs, as he checked out 64 in the seventh leg to go within one match of his second night win.

The action heads to Newcastle with Peter Wright and Joe Cullen meeting in a winner takes all match to decide who will be the final player making their way to Berlin for Finals night.