Gurney Can Do It 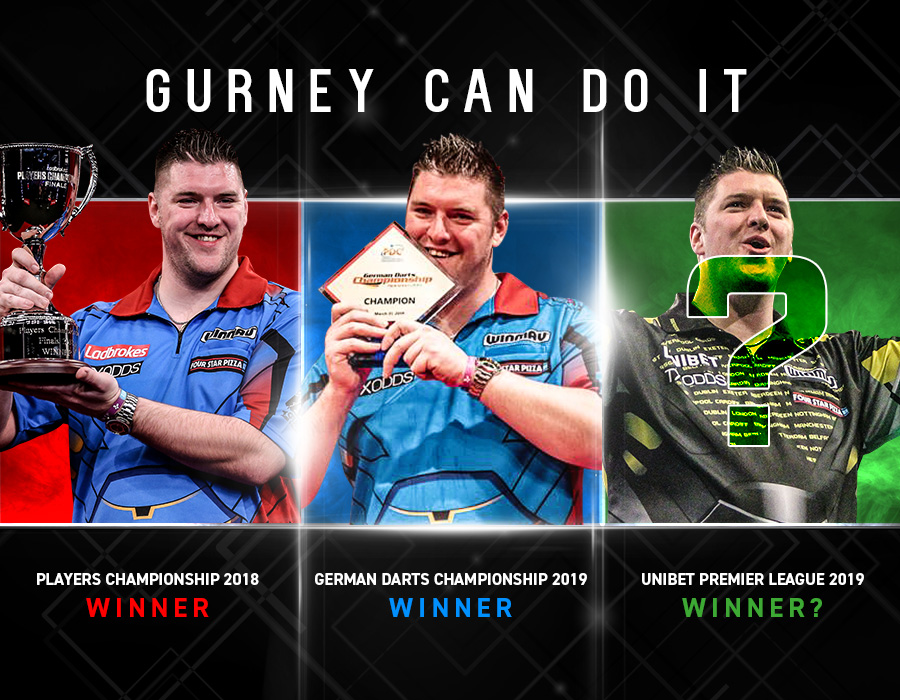 Gurney Can Do It

Daryl Gurney faces his first ever Premier League finals at the O2 arena this Thursday 23rd May, where he faces the seemingly invincible Michael van Gerwen in a sudden-death semi-final.

The Northern Irishman has travelled a stratospheric distance up the two-year Global PDC rankings, where only 3 years ago the stead-fast power thrower was ranked at 22nd.

Within a three year period Daryl has secured two major televised titles, multiple PDC ranking titles and numerous other top eight and top 4 finishes. This has seen Gurney evolve into one of the World’s most dangerous opponents, with his forthright and direct style that can result in prolific burst of power scoring to damage any player.

For Daryl to progress to the final of the huge 16-week Premier League final would be beyond most people’s wildest dreams, but not Daryl’s, as he backs his talent unquestionably.

Daryl said, “This Premier League has been absolutely brutal, with every game hanging on a knife edge, meaning any slip up and you were drifting out of the top four.

“To secure my place in the very last qualifying week was not ideal but was still absolutely amazing considering the effort it took, and now that I’m in the last four there is no doubt in my mind that I can win the entire event”

Daryl faces Michael van Gerwen who he has beaten back-to-back in this season’s Premier League, which alone is a highly impressive statistic, but Michael will no doubt be aware of Daryl’s awesome ability and this promises to be a cracking game.

Daryl has a superb approach to the dartboard, making sure he can see exactly what he’s aiming at long before he takes his stance at the oche, this sets him up target ready - immediately. His eyes are focused on the exact point he’s aiming at, where he wastes no time in raising the dart to its load position.

Daryl’s immaculate principles of superb setup, posture and alignment allows him to find his natural rhythm under the most intense pressure.

Stephen Feeney – SightRIght global coach specialist said: “Looking at Daryl’s throw from a pure accuracy point of view, he gives himself an almost perfect look at the target, which helps make him such a heavy scorer and a hugely exciting player to watch. His accuracy principles are clearly what have helped Daryl shoot up the World rankings”

Full coverage of the finals night at the O2, London will be broadcast on Sky Sports from 7pm in the UK and via the PDC's broadcasting partners Worldwide.