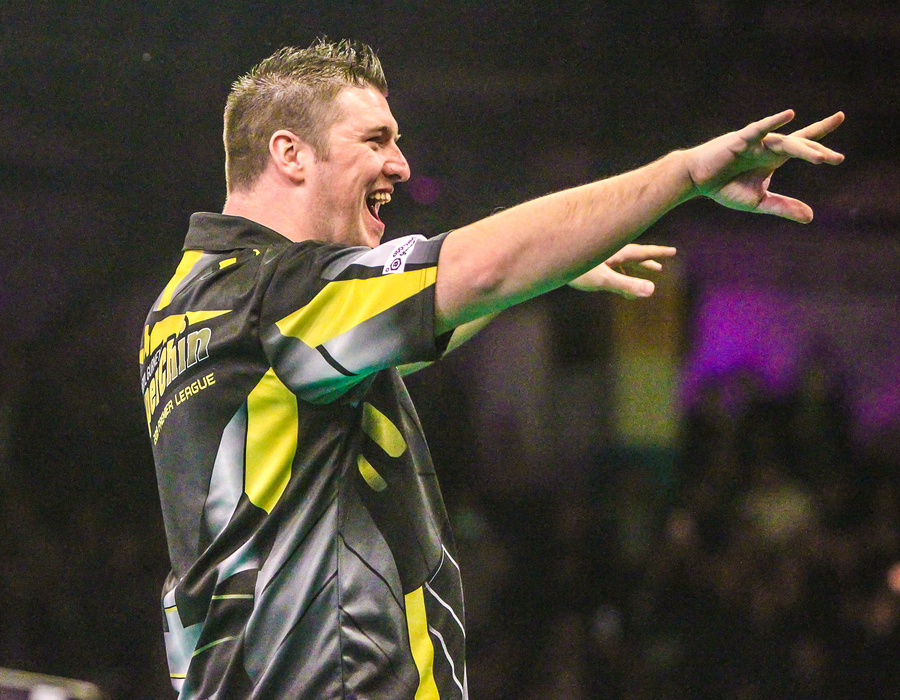 The Northern Irishman faces a crunch Unibet Premier League battle with RVB tonight as both fight to avoid the Judgement Night drop.

Superchin is three points ahead of the Dutchman but knows it will be tough in front of a 14,000 sea or orange.

He said: “I’m only one point off the top four now so I need to build on that. So Rotterdam will be massive for me to play Raymond. Now I can push for the top four.

“Not being nasty but I’d like to put Raymond out in Rotterdam. But it’s going to be difficult in front of 14,000 Dutch fans. Obviously I might need to do a Mervyn King and put in ear plugs.

“But I don’t think there’s big enough ear plugs in the world to drown out 14,000 people wearing orange!

“In all honesty I’m looking forward to it. The walk-ons are amazing in Rotterdam.

“My two favourite walk-ons ever have been Gary Anderson in Glasgow and John Henderson in Aberdeen.

“Funny enough I’ll be getting goosebumps watching Raymond’s walk-on in Rotterdam waiting to play him. But I’ve got to go from goosebumps to silencing the crowd and beating him.

“I’ve put extra pressure on myself to play in Belfast and get past Judgement Night. I only get to play there once a year.

“I’d be really disappointed if I didn’t get to make Belfast because obviously the atmosphere as we’ve seen last year was brilliant. One of the best walk-ons I ever had last year.

“Hopefully now I’ve cemented my chance of playing there now in two weeks time. Belfast will be bouncing. I would have been distraught not to make it to Belfast.”

Gurney was a Dutch destroyer last week in Berlin, beating Michael van Gerwen 7-5. Now he has to continue that better form.

He said: “All I’m doing the whole game is fighting myself. It wasn’t a great game. I went 2-0 down, took out a couple of finishes but I spent the who game fighting with treble 20.

“When my first dart is right I can beat anybody. I don’t feel safe from relegation yet. Whatever I do and Raymond van Barneveld does is two different things.

“All I wanted was a point out of this game just in case Super Raymond turns up against me in Rotterdam!

“I was very nervous because previous weeks haven’t gone to plan. It looked the same when I was 2-0 down.

“My darts were dipping an inch below the treble. So I started throwing harder and eventually got myself back in the game.

“The performance was OK, I think 98 average, and you’d take that every week.

“What is hard about this game is that I’ve got so many gears ahead of me. I’m going up there thinking I’m play terrible but I can do so much more.

“There’s a few positives but I’m still not playing anywhere near my best, that’s for sure.”