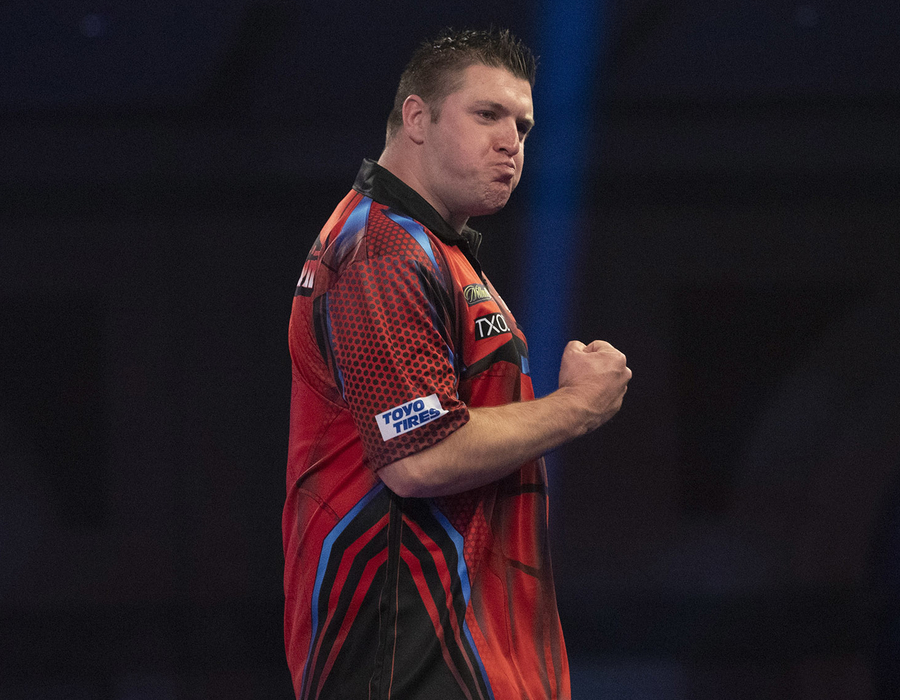 Gurney came into the event under pressure to arrest his slump in form, and had to dig deep to avoid becoming the first major casualty of the tournament.

The Northern Irishman looked on course for the performance of the tournament so far with an average well over 100 as he took the opening two sets for the loss of just one leg.

However, the 11th seed was pegged back by a typically resilient O'Connor, who capitalised on four missed match darts from Gurney to claim the third set.

O'Connor was growing in confidence, and took out a 122 finish on his way to winning set four to take the contest the distance.

Gurney turned the tide back in his favour with a break of throw in the first leg of the deciding set, which he wrapped up 3-0 to book his place in round two where he will face Chris Dobey.

"I've been working so hard at home to prepare for this World Championship," said Gurney.

"I needed to put the work in to get myself up to speed because I feel like the standard in the PDC is moving on and I don't want to get left behind.

"I feel so much more confident and my scoring has come back. I've always been a big scorer and I need to be hitting trebles to feel comfortable up there.

"I have been awful recently by my own standards. I knew it would be a tough game today so I'm pleased to get through it."

Recent Grand Slam of Darts winner De Sousa came from a set down to defeat Smith and end a losing run at Alexandra Palace stretching back to the 2011/12 event.

The Portuguese sensation struggled to find his trademark scoring power in the opening set which Smith won 3-0.

However, De Sousa won six of the next eight legs to turn the contest on its head and lead 2-1.

Smith began the fourth set with a 127 checkout, but was unable to force a deciding set as De Sousa reeled off the final three legs to reach the last 32 where he will face either Mervyn King or Max Hopp.

"I think there is more pressure on me now, but I don't think about that. I just play my game," said De Sousa.

"Ross is a great player. I'm really happy to get my first win here, it's really amazing for me.

"This is my fourth time here, I lost always in the first round but now it's different because my game is more consistent. I will keep trying my best and hopefully I can show a bit more in my next game."

The third day of the £500,000 tournament saw 13 nationalities in action as saw six round one matches also took place, with Jamie Lewis and Ryan Searle coming through entertaining five-set matches.

Lewis produced a remarkable turnaround from 2-0 down to beat Luke Woodhouse 3-2 and set up an all-Welsh second round tie with Gerwyn Price.

Former semi-finalist Lewis was outclassed in the first two sets by Woodhouse, who landed four ton-plus finishes in an impressive display of finishing.

Lewis, who has openly discussed his struggles with anxiety in recent months, showed great character to win six of the next eight legs to send the match to a deciding set.

Woodhouse took the opening leg of the final set, but checkouts of 85, 61 and 100 followed from Lewis to keep alive his hopes of retaining his place on the PDC circuit in 2021.

"I started off really badly. I thought I was going to lose 3-0 and be going home," Lewis admitted.

"I started playing a bit more like I can and got the job done, so I'm happy.

"Two months ago I was probably the worst darts player in the PDC but I'm coming back now.

"The next game will be very hard. What Gezzy has done for Welsh darts is unreal. I'll give it my best shot and see what happens."

Searle also came through a difficult test against American Danny Lauby, winning the deciding set to maintain his 100% record in World Championship first round matches.

A Players Championship event winner in 2020, Searle averaged over a ton for much of the contest but was unable to pull away from Lauby, who impressed on debut.

Searle took the opening set without conceding a leg and was waiting on 24 in the set two decider to double his lead, only for Lauby to produce a stunning 148 checkout to level.

Finishes of 121 and 95 helped Searle on his way to winning the third set, but Lauby once again fought back to level and take the contest to a fifth set.

With Searle leading 2-1, Lauby missed six darts to take the contest to a sudden-death leg which allowed Searle to find the winning double one and advance to round two where he will take on Jeffrey de Zwaan.

"That was a tight game, I was glad it didn't go to a deciding set," said Searle.

"Fair play to Danny, he gave me a real tough game. The 148 to win the second set hurt massively.

"I'll take the win to settle me in and I'm looking forward to my next game now.

"I always look forward to this tournament, it's the best tournament in the world. This is the one you want to do well in to further your career."

Ryan Murray set up a second round tie with Michael van Gerwen after enjoying a 3-1 debut win over much-fancied Filipino talent Lourence Ilagan.

A newcomer on the PDC circuit in 2020, Murray continued his strong first year form, landing a 116 checkout in the opening leg on his way to winning set one.

Ilagan hit back with a 100 checkout to start the second set which he won without loss of a leg to level, but went on to miss a dart for the third set which allowed Murray to regain the advantage.

A 13-darter from the Scot set him on his way to winning the fourth set to wrap up a comfortable victory in the end.

Japan's Edward Foulkes was also a debut winner as he impressed in a 3-0 victory over Mike De Decker.

An unknown quantity in steel-tip darts, Foulkes got off to a flying start in the battle of the debutants, averaging over 100 and taking out a 140 checkout on his way to taking the first two sets.

De Decker hit a 117 checkout to go 2-1 up in set three, but the Belgian then missed two set darts which allowed Foulkes to claim the final two legs and set up a second round meeting with Brendan Dolan.

"I was very nervous, but I am happy with how I played," said Foulkes.

"I have been playing soft-tip darts in Japan for quite a long time, but I am fairly new to steel-tip darts.

"I'm looking forward to my next game. If I play my best, maybe I can win."

Ron Meulenkamp made it through to round two for a second successive year by overcoming Boris Krcmar 3-1.

Croatia's Krcmar was making his first Alexandra Palace appearance since 2011 and started the stronger of the two with a trio of 15-darters to take the opening set 3-0.

Meulenkamp hit back by winning the second set without losing a leg, before surviving a dart in the set three decider to go 2-1 up.

From there, Meulenkamp pressed home his advantage, comfortably winning the fourth set against a fading Krcmar to book his place in round two where fellow Dutchman Vincent van der Voort awaits.

Madars Razma will take on Gary Anderson after claiming his first win on the Alexandra Palace stage with a 3-0 defeat of Japan's Toru Suzuki.

Razma started the contest slowly and was left to rely on Suzuki squandering five darts for the first set and four for the second to take a 2-0 lead.

The Latvian, who lost to Harry Ward on debut last year, won another third set decider to make it through.

The William Hill World Darts Championship continues on Friday with another two sessions of first and second round action, as James Wade takes on Callan Rydz and Luke Humphries meets Paul Lim.

Global coverage of the tournament is headlined on the dedicated Sky Sports Darts channel, while the PDC's international broadcast partners will include RTL7 in the Netherlands, DAZN in various territories, Fox Sports in Australia, Sky Sport in New Zealand, PDCTV for Rest of the World Subscribers and at matchroom.live