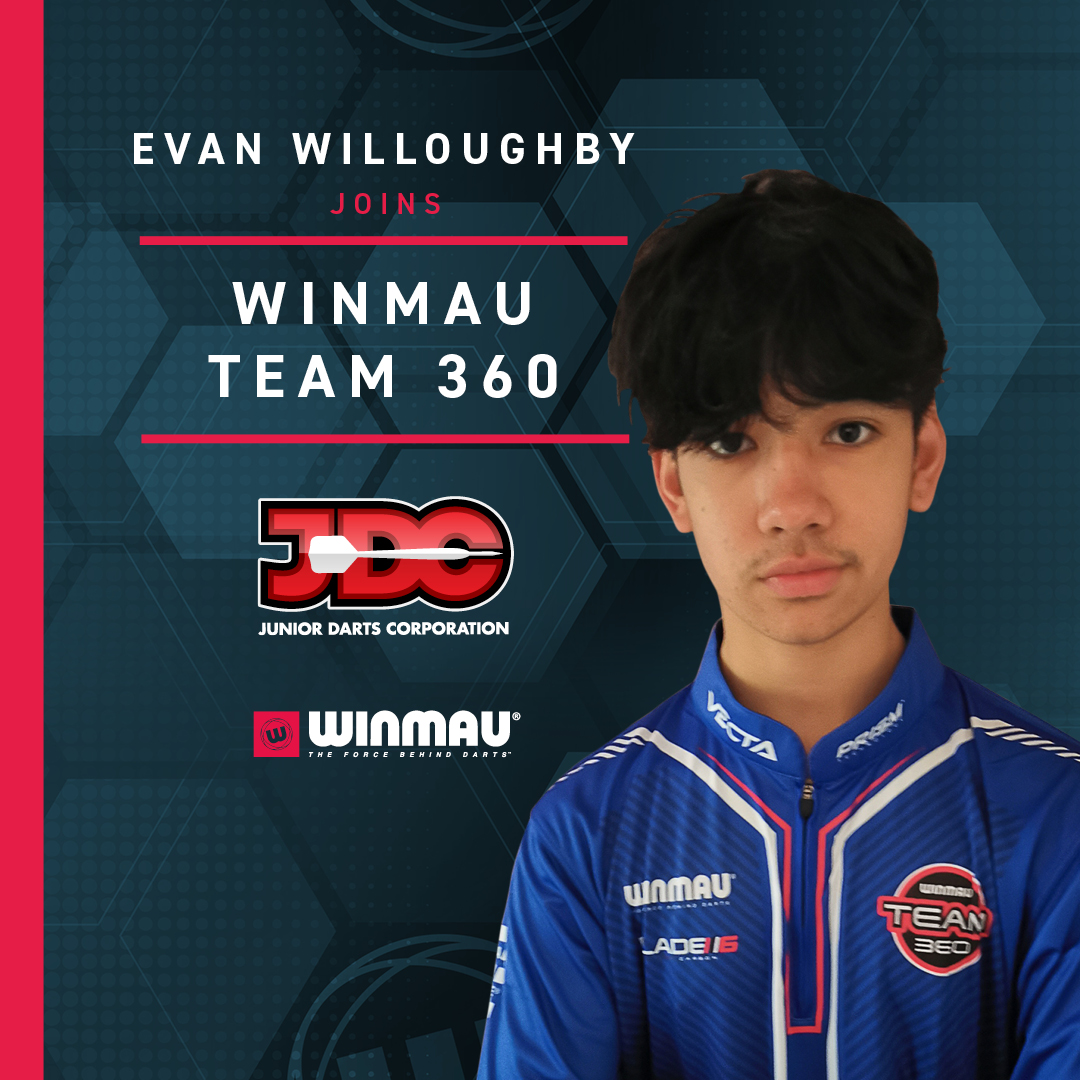 JDC Foundation Number One Evan Willoughby has joined Winmau Team 360 after making a very impressive start to 2022 in the Junior Darts Corporation.

Evan played for Berkshire five years ago where he won seven out of seven matches for his county before moving on to online competitons during the Covid 19 lockdown. He now plays for Wiltshere County mens A team where The Warrior has picked up three wins out of five, as well as a top spot in the Wiltshere Super League where he only lost one match out of his 16 played in the competition.

He has also played for England at a national level winning three out of his four matches against Hungary, as well as two out of four victories over Ireland for his country. Evan also won two matches for England during lockdown winning in the online format introduced during the pandemic period.

Willoughby narrowly missed out on a tour card in 2021 but has dominated proceedings so far within the JDC this year winning two events in the opening weekend, before achieving a clean sweep of victories in Coventry back in February. The youngster from England also reached the Quarter Final and Semi Final of the two events he has not won so far this year.

Evan beat fellow Team 360 player Nicholai Bado in his run to the Final of Event 6 back in Coventry in early April before winning against Massimo Balsamo from the Netherlands 5-0, and recording an average of 88.41 which some of the players on the PDC Pro Tour sometimes struggle to beat.

The Warrior would face a stronger test on the Sunday with a rise in form for fellow English youngster Matthew Holmes, needing a last leg decider to see him off in the Final of Event 7 winning 5-4. Evan beat Holmes again in the second event of the day, this time in the Semi Final, with the youngster dropping no legs in winning his final two games and win Event 8 to complete the perfect weekend.

His recent performances in the last foundation tour events has earned him a spot in the JDC World Darts Finals which are scheduled to take place later on in the year in Gibraltar. The likes of darting senstation Luke Littler who impressed at Lakeside and former boys world champion Leighton Bennett have already booked their spots in the Finals alongside Evan.

He has also qualified for the UKDA mens singles and doubles finals which are scheduled to take place in Rotherham later this year in a further achievement for the young darting star.

The Warrior’s deal with Winmau and Team 360 will see him develop his game even further under the guidance of head of development and JDC CEO, Steve Brown.

Steve said: “You can seen how impressive Evan has been in his development with his JDC foundation tour wins, so I am very happy he is going to be part of the Team 360 programme”

Winmau Marketting Director Simon Hall added: “Evan is a hugely talented player having already qualified for the JDC World Finals. He is already showing huge signs of potential and we look forward to seeing him develop even more with Winmau and Team 360”.