Jeff Smith Back in Action Even More Determined 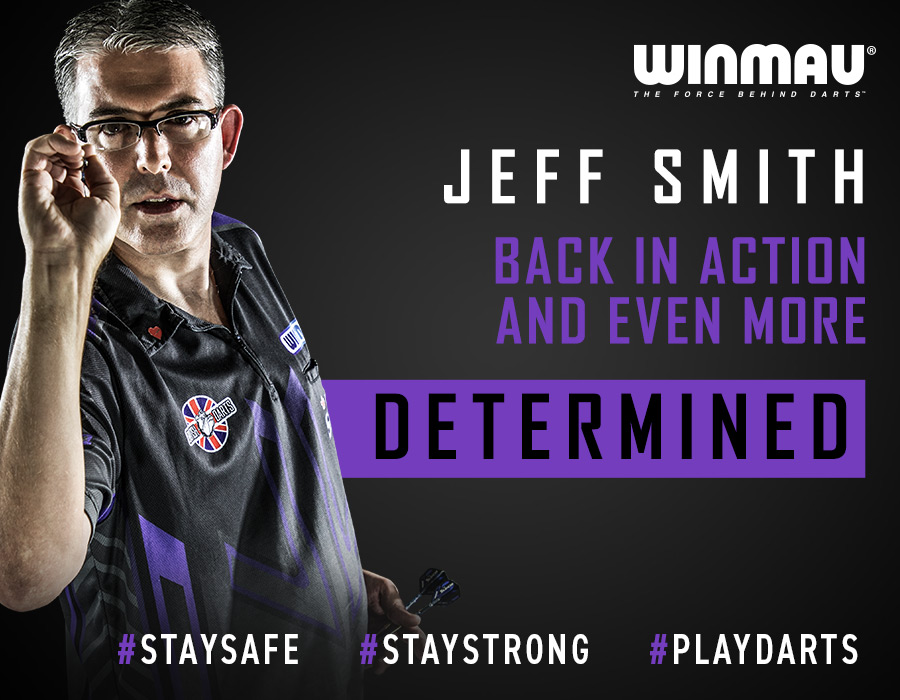 Jeff Smith Back in Action Even More Determined

Jeff Smith watched in horror his car body shop go up in flames but then made sure it re-ignited his darting career.

The Canadian 2016 BDO World Championship runner-up was mowing his lawn nine months ago when suddenly his life was turned upside down.

A customer yelled that his shop was on fire. But from that disaster, The Silencer has dedicated his life back to the oche.

After winning his PDC Tour Card in January, he will make possibly the longest journey of all players of 3,600 miles from New Brunswick to Milton Keynes to compete in the Summer Series.

Smith, 44, revealed: “I live two doors down from it, probably about 500 yards. One of my customers came flying up the driveway and was hollering. I was asking what was going on and he said ‘your shop’s on fire’.

“It was a Sunday afternoon, I was out mowing my back lawn. We ran to it and we almost got the fire out. That was the downside to it.

“But with all the oils, paint and fumes within 20 minutes it was on the ground.

“The mechanics next door left a battery charger on overnight. It was two shops that were attached and it unfortunately took mine with it.

“I had full intentions of re-building it in the spring but I ended up getting my PDC Tour Card and I wanted to see how that worked out before I committed to anything back home.

“The body shop and my own business gave me the financial freedom to do darts. I could book my own schedules.

“My shop went up and that was back in August. So instead I put some serious hours on the board in the view to going back to Q School.

“The proof is in the pudding that you put the effort in and the rewards are there.

“You’ve just got to make the best out of a bad situation. Maybe it worked out for me in the end. It gave me that kick to get back into the darts again.

“I’ve got a great management team putting up with me working and living back here in Canada. Now I’ve committed to playing darts and it’s be OK so far.

“I’m now working with a friend of mine in his body shop, he’s in my darts team actually. He had a body man that didn’t turn up and was looking for some extra help. We had a conversation about working there and playing darts and they’ve been phenomenal.

“It’s back to my old life again. I’m fortunate to be one of the players who can work full-time without darts.

“I’m back home in Canada working 40 hours a week in the body shop for Hatfields Auto Glass and Auto Body in Saint John, I paint cars. But I’m definitely looking forward to getting back playing again.”

World No.92 Smith had made a great start to his PDC career, making the final immediate impact on his return to PDC action, by reaching the final of the first ProTour event of the season.

He beat the likes of Peter Wright, Nathan Aspinall, Dave Chisnall and Brendan Dolan before losing in the final to two-time world champ Gary Anderson, in a spectacular opening event.

Now he can’t wait to get back for the Summer Series on July 8. He added: “I’m feeling confident about coming back over. As soon as the Summer Series is done I come straight back home and into quarantine under Government instruction. After then I can go back to work.

“But I have to make a decision that is it better I come back to the UK and stay for three months or something along those lines, I don’t know.

“I’ve got a guaranteed income here but over in the UK not so much.

“Obviously there’s a possibility of qualification for the Matchplay for me. I may end up staying for a bit longer. There’s no definite for anything right now.

“The PDC and PDPA have done the best they can. Hats off to them because obviously it’s a difficult situation for players worldwide, just not in the UK.

“They’ve got some hard boxes to tick, that’s for sure.

“The biggest thing is how the tour card is going to work out for everybody. It’s either going to help or hurt some people.

“Just based on some of the events that have been lost. I was off to a flier straight off the bat, made the final in the first event I played. Money was coming in on the rankings, everything was looking good. I should have been boarding a plane to Germany and instead I was boarding one to come home.

“I was confused more than anything not knowing what was going on in the world. The Canadian Government posted that if anyone was out of the country that we needed to get home. I was in constant contact with my manager at ZWA and he said the last flight out was on Monday and that’s the one I took.

“Since then I’ve been practising every day and playing online against Anastasia Dobromyslova and that’s been working out great for both of us.

“I played webcam darts the other night and my average is still up in the high 90s, I haven’t lost anything yet.

“But I’m looking forward to getting back to face-to-face competition for sure.

“Most of the players have been playing webcam darts in different scenarios for a few months now. As far as the five day tournament Summer Series, I don’t think they could work out any better than anyone but me. Realistically that would be a three-week trip for me but I can now do it in a week.”

Smith is also delighted to re-join Winmau, a company who have been right behind him since he burst onto the darts scene, just missing out on the BDO world title to Scott Waites four years ago.

He said: “Winmau have been phenomenal for me. Right from day one I instantly fell in love with that company and bunch of people. It’s been a great four years and to sign for another four is a great thing for me. I’m ecstatic to join them again.”