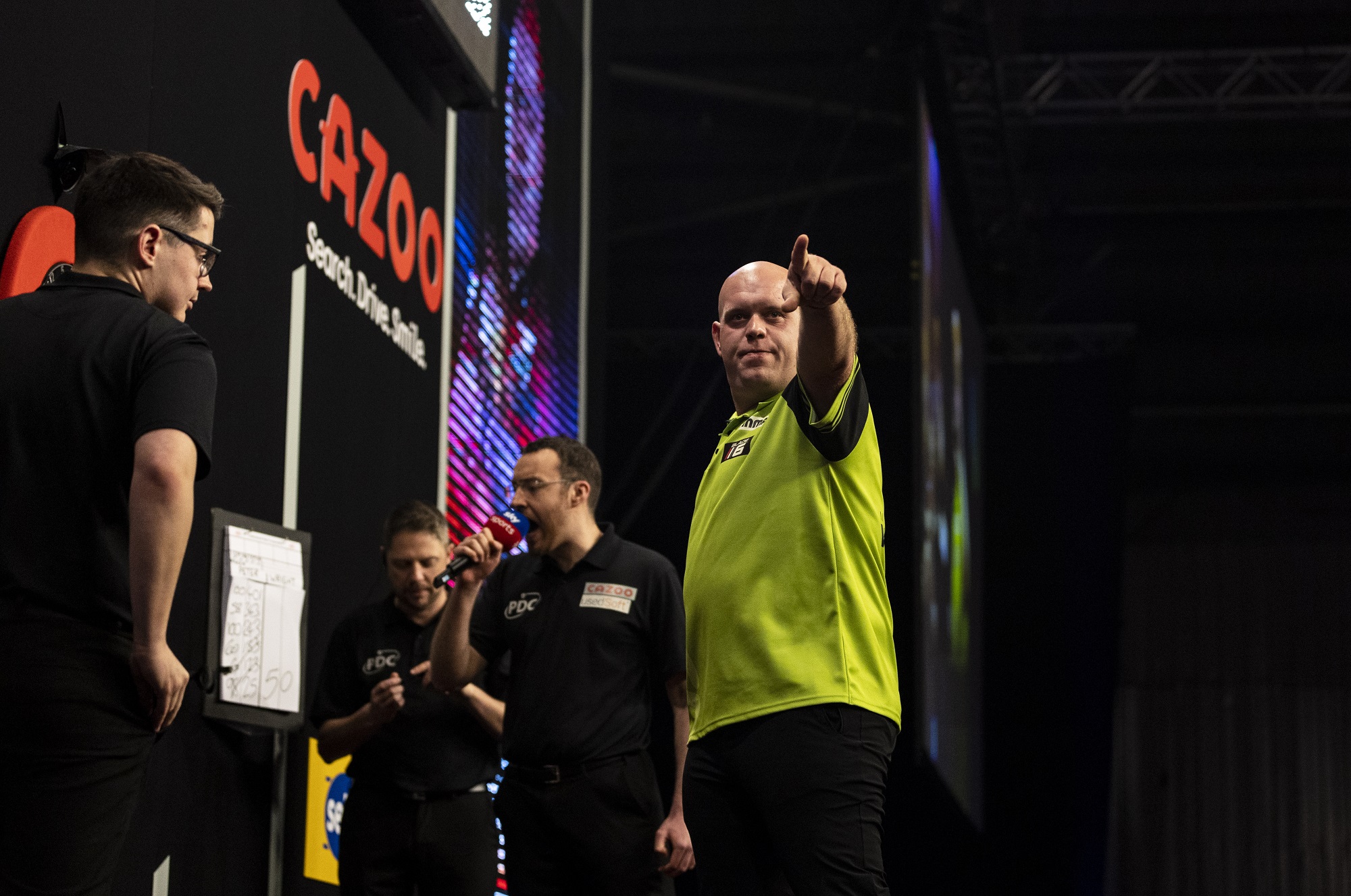 MvG returns to the Netherlands for Night 7 of the Premier League held in Rotterdam.

Michael van Gerwen will make his return to the Netherlands as the Premier League leader, with a Quarter-Final bout against World Championship runner up, Michael Smith. The previous weekend’s action in Barnsley saw “Bully Boy” reach World Number Three in the order of merit with van Gerwen dropping to fourth.

In relation to the league though, “Mighty Mike” has been the most in-form player with two-night wins so far in Exeter and Brighton. Last week’s visit to Nottingham saw his win streak come to an end at the hands of former World Champion, Gerwyn Price.

The World Number Four will have a huge advantage going into Rotterdam as firstly, he is the league leader and will be confident of extending his lead at the top and secondly, he will be playing in front of his home fans, being the only Dutchman in this year’s competition.

Michael Smith has reached the final in the last two nights running, losing in Brighton to van Gerwen and last week to Gary Anderson in Nottingham. Despite the losses, the St Helens born darting star has moved just a point of the play offs in fifth and a good run in Holland could see him into the play off positions for the first time.

The first match in Rotterdam will see World Number One, Peter Wright take on James Wade with “Snakebite” just two points off the top spot. The Scotsman will be looking to spoil van Gerwen’s homecoming with a strong performance needed to get back to the top where he once was. Wright lost in the semi-finals last week to Gary Anderson after coming back from a back injury.

He also struggled to find form in the Pro Tour at the weekend as he lost in the opening round in both events, but the stage is always where Wright plays his best darts with the Scotsman winning both the World Championship and the World Matchplay in 2021 as he said he would.

James Wade has lost in the quarter finals in the last two nights, with “The Machine’’ losing 6-1 to Michael Smith in a heavy defeat for the Englishman last week. Wade will feel he was unlucky in the manner he lost to Smith with his doubles letting him down on the night, as he outscored Smith in the match.

He is currently seventh in the league and knows he is still well in with a shot of making the play offs, being just two points of Gerwyn Price in fourth. Wade also played in Barnsley and was knocked out in the second round of both events after coming through first round matches with Darren Webster and Ron Meulenkamp.

The second match of the night sees Gary Anderson hot in form take on Joe Cullen, with both needing good runs to get points on night seven. Anderson’s win in Nottingham saw “The Rockstar” become the league’s bottom player with his final appearance in Liverpool being the only wins of his campaign.

Cullen received a bye in Exeter earning him another two points after Gerwyn Price’s withdrawal because of a wrist injury, with quarter-final defeats in the remaining four nights so the need for a big performance is huge for him.

Gary Anderson comes into Rotterdam on the back of winning in Nottingham last week, as well as reaching the final in Pro Tour Event 5 which saw him lose to an inform Damon Heta. The Scotsman beat Cullen in the semi-finals in Barnsley, so will hope for a similar result on Thursday.

The Scotsman was adrift at the bottom going into last week but is now just two points of the play offs in sixth. He found his top game last week in beating the likes of Jonny Clayton, Peter Wright and Michael Smith earning five points after only winning one match in the league so far.

An all-Welsh affair will take place in the third match of the night as Wales World Cup teammates Gerwyn Price and Jonny Clayton will go head-to-head, with the game being huge for both if they are too stay in the play off positions come the end of the night.

Clayton sits third in the league with Price in fourth and with how close the players chasing the play offs below them, the loser could see themselves chasing the top four next week in Birmingham.

Price reached the semi-finals after beating Michael van Gerwen last week, coming back into action after missing the week before in Brighton. He couldn’t repeat his form in the semi-final though losing 6 straight legs to Michael Smith in a 6-4 defeat.

Price is currently fourth in the league after winning in Belfast hitting two nine darters, as well as reaching two semi-finals in Nottingham and Liverpool. “The Iceman” has accumulated 9 points so far keeping him in fourth despite not playing a week, which must be recognised by many as outstanding from Price.

Jonny Clayton is the defending champion and has won one night so far in the league, coming out victorious in Liverpool on night two. He has also reached the final on another occasion on the opening night in Cardiff, putting “The Ferret” four points of top spot and two points clear of Michael Smith in fifth.

The World Number Eight played in Barnsley at the weekend and was impressive in beating the likes of Kim Huybrechts 6-1 with a 104.58 average, as well as beating Jamie Hughes on the Saturday 6-4 with a 101.35 average reaching the third round on Saturday and the fourth on Sunday.

Action gets underway at 7pm on Sky Sports Arena with Michael van Gerwen looking to return to winning ways in his home country.