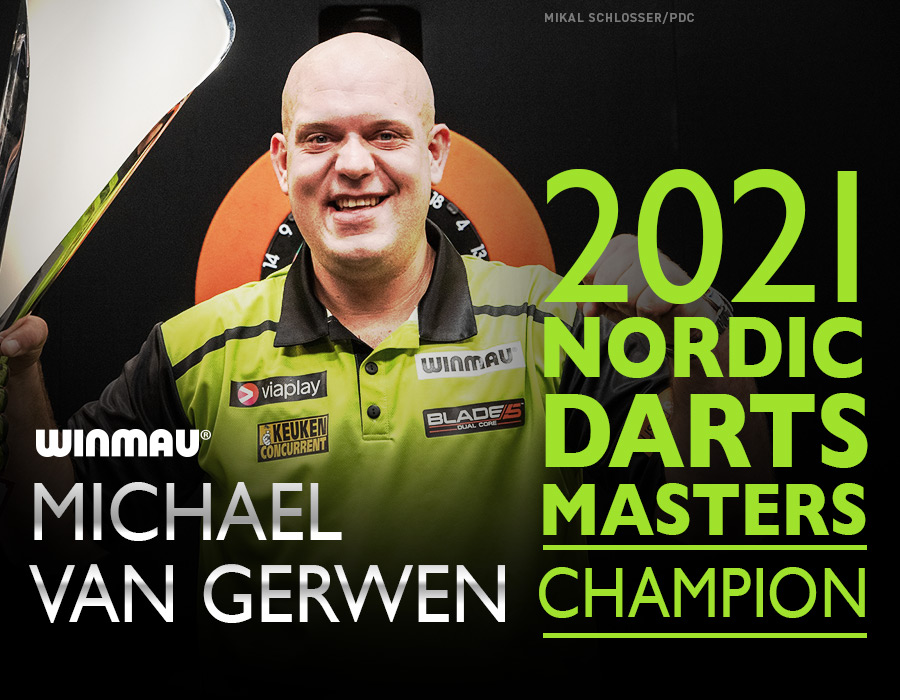 Michael van Gerwen was in phenomenal form as he claimed the inaugural Nordic Darts Masters title on Saturday, defeating Fallon Sherrock 11-7 in the final.

A visibly emotional MvG put to bed an almost ten month long run since his last tournament win, but was back to some of his emphatic best as he defeated Darius Labanauskas, Madar Razmas and Jonny Clayton on his way the final.

MvG endured a tough opening test by defeating Darius Labanauskas 6-5 in the first round, but then hit ton-plus averages in his following victories.

He then had to come from 6-3 down to win a superb decider 11-7 against Sherrock, who became the first female player to win through to a PDC televised final against male opposition.

Having defeated Denmark's Niels Heinsøe 6-1 in Friday's first round, Sherrock benefitted from a quarter-final bye after World Champion Gerwyn Price withdrew from Saturday's final stages due to an elbow injury.

However, she had to fight all the way to win her semi-final against Dimitri Van den Bergh 11-10 in a thrilling finale - as the Belgian missed eight darts for victory himself.

Sherrock then found herself 2-0 down to Van Gerwen in the final as the world number three opened the game with a 180 and took out 110 to break in leg two.

Sherrock, though, won six of the next seven legs in either 13 or 14 darts to move 6-3 up in a remarkable run which brought over 4,000 Danish fans to their feet.

Van Gerwen finished 72 to hit back and 122 to reduce the gap to 6-5, but a miss at tops for a 154 checkout allowed Sherrock in on double nine to regain breathing space.

Legs of 13 and 14 darts saw Van Gerwen draw level, before he posted double ten to regain the lead at 8-7 and a 14-darter to move two legs clear.

Double four moved Van Gerwen to the brink of victory at 10-7, and he finished 80 in two darts to seal glory and end his 2021 title drought.

The Dutchman broke down in tears as he lifted the trophy, and admitted: "To win this means a lot to me and I'm very proud.

"I've been through a really tough period, there was so much pressure on my shoulders.

"I've had to wait a long time to win a trophy - for my ability and what I'm capable of, it's been too long, but that makes it even nicer, and this tournament had everything.

"It was very difficult for me and I've had to work really hard. Jonny played out of his skin in the semi-final and I can only give credit to Fallon for how she played.

"She played a phenomenal tournament and I think she played one of the best games of her life in the final, and I had to find another gear.

"It's been a phenomenal day of darts for everyone and I think I deserved it this weekend, I played really well overall.

"The fans have been absolutely incredible and I can't thank them enough, I hope I can come back next year."

Sherrock's run to the final sees her return to the spotlight ahead of the forthcoming PDC Women's Series, where she will attempt to qualify for the Cazoo Grand Slam of Darts and William Hill World Darts Championship.

"I was so proud of myself, especially to push Michael as much as I did," admitted Sherrock. "It's Michael van Gerwen, and I was so close to him!

"I cannot put into words how I was feeling [at 6-3 up] - I was shaking but I had to stay calm. I've taken every opportunity that I can get - showing everyone how I can play and pushing one of the best in the world, I'm so happy."

The Nordic Darts Masters was the only international World Series event ahead of the Jack's World Series of Darts Finals at AFAS Live in Amsterdam from October 29-31. For tickets, visit ticketmaster.nl.