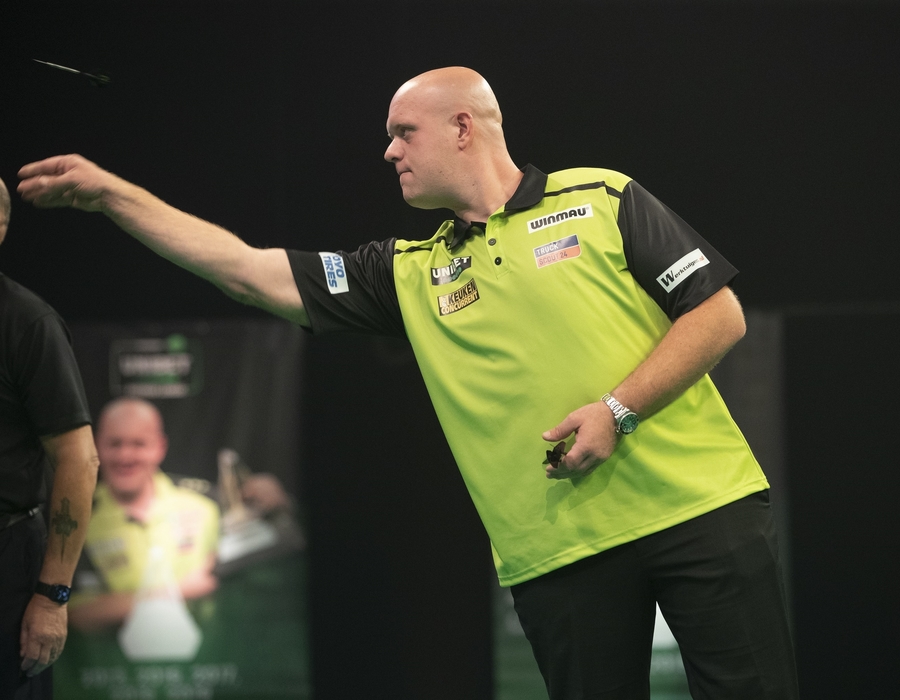 Michael van Gerwen and Joe Cullen have both been drawn in Group A for the BoyleSports Grand Slam of Darts which begins this afternoon at the Ricoh Arena in Coventry.

Three-time champion Van Gerwen, who last picked up the title in 2017, will be hoping to pick up his first TV title since March.

The world number one will take on qualifier Adam Hunt in his Group A opener, with debutant Joe Cullen and top-ranked German ace Gabriel Clemens facing off in their group's other tie.

Van Gerwen was almost forced to withdraw from the World Cup of Darts due to a back problem last weekend, but the Dutchman has revealed he is now fit and raring to go.

"Everything is fine now with my back. The doctors said I'm fine to play," Van Gerwen explained. "It's important to feel fit and ready to play during these busy times

"The last two years Gerwyn Price did phenomenally well in this tournament. You always want to win any tournament you play in so of course you're disappointed when you don't win.

"But the most important thing is to make sure you work hard to come back stronger. I'm making big steps in the last few weeks and I'm seeing the brighter side of my game again."

Joe Cullen has been on superb form in recent weeks and picked up his first PDC ranking title with his new Winmau equipment and has been hotly tipped to progress out of the group with MvG in his Grand Slam debut.

Joe said “The last few months I’ve really been happy with my scoring game and consistency, it’s perfect timing really coming into this busy end to the year

“The transition to these new darts has been so smooth and it’s given me a fresh energy on the practice board to push on with my game.”

The 14th staging of the tournament will see a 32-player field, comprising PDC event winners and qualifiers along with two BDO players, competing for £550,000 in prize money from November 16-24.

The group stage will take place across the opening four days, as the players compete in a round-robin format.

Price comes into the tournament in red-hot form, having lifted the World Cup of Darts for the first time alongside Clayton last weekend before picking up his eighth title of the year at the Winter Series on Thursday.

“I’m in some good form off the back of winning the World Grand Prix and World Cup. Hopefully I can have another good run here, I'm looking forward to it,” said Price.

“I like the favourite tag. It gives you a little boost and a bit of extra confidence. It shows that not only am I confident, but other people are confident in my ability as well.

“Hopefully I can go out and play like a favourite.

“To win three in a row is something that has only been achieved by Phil [Taylor] and Michael [van Gerwen] so it would be nice to make a bit of history and join them.”

Since last year's event, the 50-year-old became the first woman to win a PDC Tour Card in January and, having enjoyed a promising first year on the professional circuit, Ashton feels better placed to make an impression this year.

"It's always a dream come true to play in a the big PDC events, so to play in the Grand Slam back-to-back, I couldn't ask for anything better,” said Ashton.

"I'm not here to make the numbers up. I played well last time but hopefully I can improve my results this time around.

"It's going to be different playing without a crowd for the first time on TV, but I’ve played in quiet atmospheres before in the BDO so hopefully I can draw on my experiences there.

"Playing the top players week-in, week-out has without doubt raised my game.

"The experience of playing on the PDC tour has been brilliant. It's improved me as a player from this time last year. Hopefully I can show that improvement with a good run this week."

Number eight seed Gary Anderson, a double World Champion, will be up against Simon Whitlock Ryan Searle and Czech Republic teenager Adam Gawlas in Group B.

Monday's winning players in each group will meet on Tuesday, while the two losing players also clash.

The third games in the group stage will be held on Wednesday and Thursday, with the top two players from each group progressing to the knockout stages, which begin on Friday and run through to Tuesday's final.

The Grand Slam of Darts will be broadcast live on Sky Sports, as well as through the PDC's international broadcast partners including RTL7 and DAZN, for PDCTV Rest of the World Subscribers and through matchroom.live.