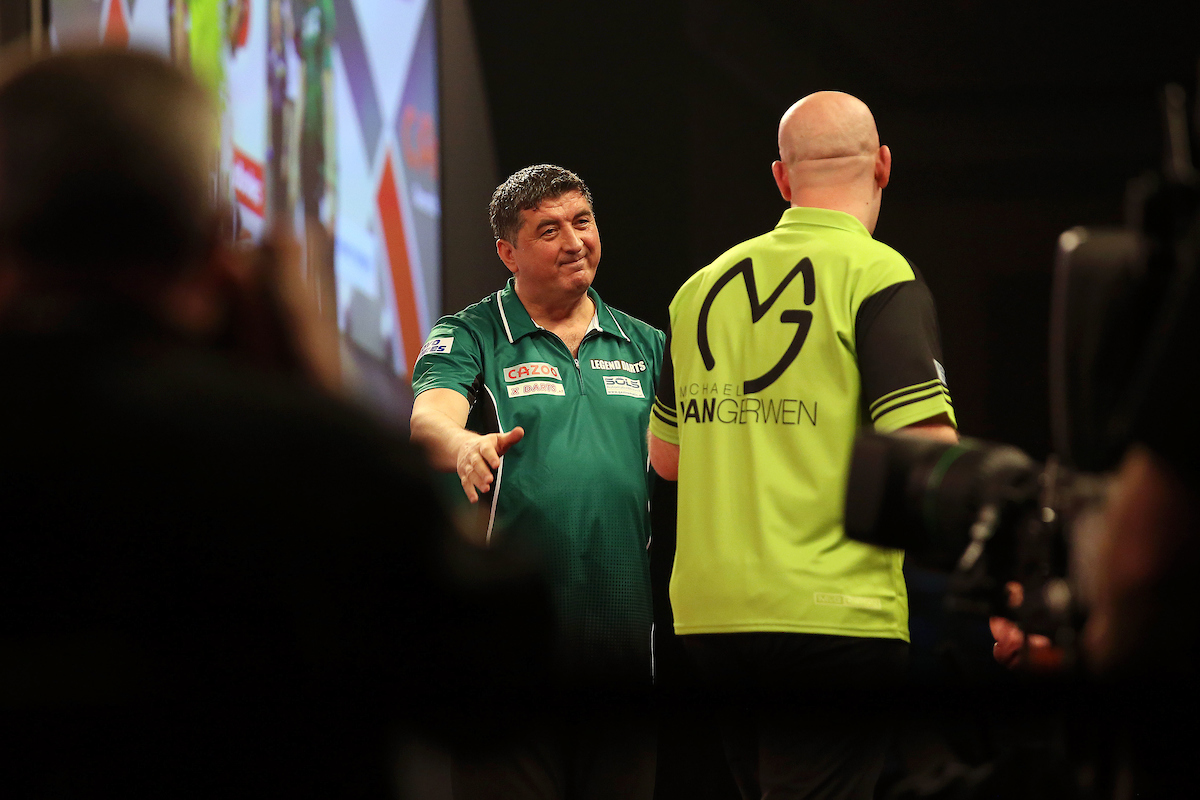 Masters champion Joe Cullen continued his campaign with a whitewash 4-0 victory over Damon Heta, including a staggering seven breaks of throw against the man with the best finishing across the PDC Circuit in 2022.

MVG opened strong in the opening sets, taking out checkouts of 101 and a crucial 64 on double eight to take the deciding leg of the second set lead 2-0. His Austrian opponent was playing some of the darts he was producing when he won the Champions League of Darts and qualifying for the Premier League on the regular, as he kept up with the Winmau man’s scoring on the oche.

Van Gerwen lost the third set but found a huge break of throw to clinch the fifth leg of the fourth set, going within one set of yet another World Championship Last 16 place. The Gentle bought North London to its feet as he pinned the bull for a 161 checkout, after the World Number 3 had left double sixteen and opted against a shot at the bull himself.

But it was the former three-time World Champion who prevailed on the oche, recording the highest average of the competition so far as he wrapped up a 4-2 win to set up a clash with either compatriot Dirk van Duijvenbode or European Championship Finals winner Ross Smith.

Joe Cullen had met Damon Heta already in the opening round of this year’s World Matchplay, a tungsten tussle which the Rockstar won 10-2 at the Winter Gardens.

It was de ja vu for the Winmau man at the Alexandra Palace, as the Premier League finalist broke throw twice in the second set to take a 2-0 lead against the Heat.

The World Number 13 included his highest checkout of 108 to clinch the third set, breaking the Heta throw again as he looked to book his spot in the Fourth Round of the World Championship for the second time.

Cullen found double sixteen to checkout 47 in two darts and clinch the fourth set without reply from his opponent, as he prepares for a rematch with Michael Smith after the pair met in the Quarter Finals of the Grand Slam.

Bully Boy progressed to the Last 16 including the second 170 finish of this year’s World Championship, as the reigning Grand Slam winner battled from 3-1 down in sets to beat Martin Schindler 4-3 and remain in the hunt for his first world title.

Elsewhere, Jose de Sousa recovered from 3-0 down and survived match darts as he beat Ryan Searle 4-3 to set up a Fourth-Round clash with World Number 1 Gerwyn Price, in Thursday’s evening session. Chris Dobey dumped Gary Anderson out at the Third-Round stage with a 4-1 win, as the Flying Scotsman exited the tournament at the L32 for the first time since his debut back in 2010.

The Cazoo 2023 World Championship continues Thursday, with Mervyn King facing 2018 World Champion Rob Cross in the afternoon session, whilst Luke Humphries takes on Vincent van der Voort in the last Third Round tie of this year’s tournament in the evening session.

The Fourth Round will also commence with Gerwyn Price taking on Jose de Sousa, whilst former Premier League champion Jonny Clayton takes on young future star Josh Rock in an eagerly anticipated showdown on Day 12 at the Alexandra Palace.