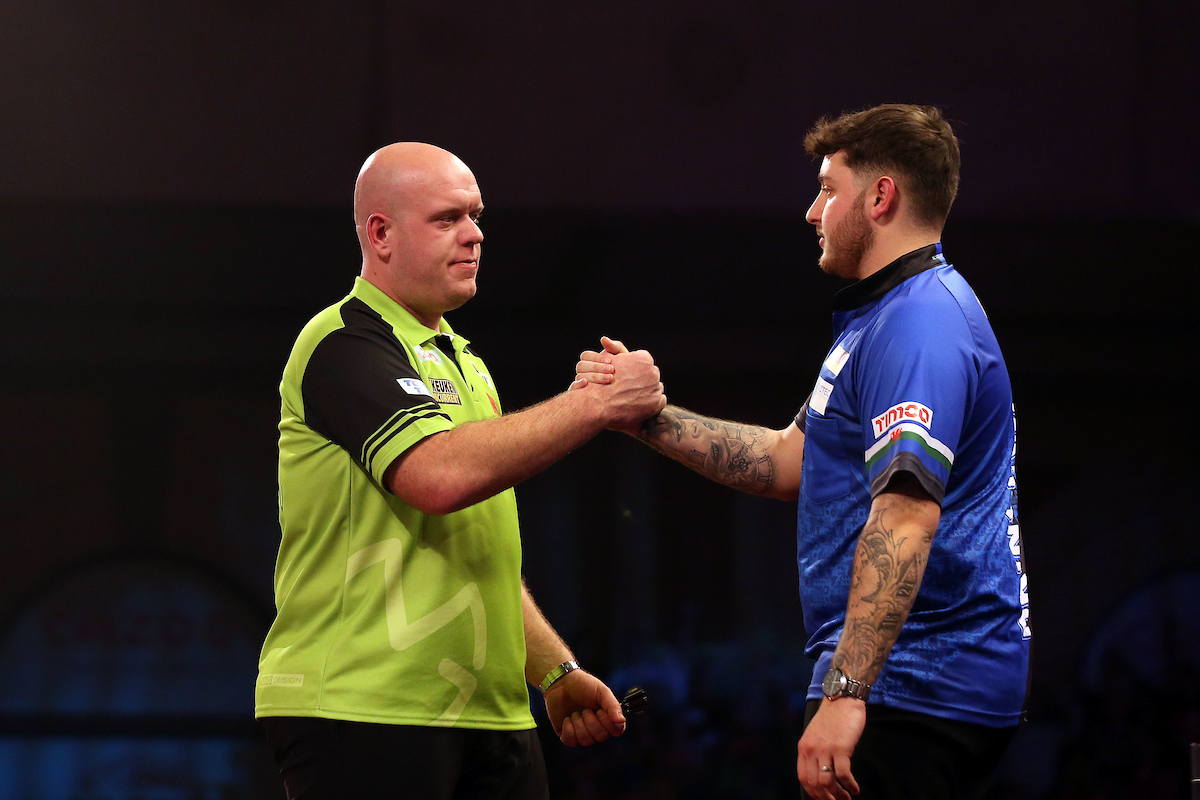 Cazoo 2023 World Darts Championship tournament favourite Michael van Gerwen opened his campaign with a convincing 3-0 victory over Lewy Williams, dropping just one leg in reaching the Third Round. Mervyn King also reaches the Last 32 after surviving a late fightback from Danny Baggish, impressing in the fifth and final set to win.

MVG posted the highest winning average of this year’s competition, scoring 101.84 over the nine legs played against his young Welsh opponent. The World Number 3 found two consecutive 94 checkouts, with the first breaking the throw in the second leg of the second set.

Van Gerwen wrapped up the match after finding double tops first dart, indicating a dominant start whilst letting the rest of the field know that he is the man to beat at this year’s World Championship. The Winmau man will face either 30th Seed Mensur Suljovic or Belgian Mike de Decker who play on Thursday’s afternoon session in the Last 32.

Mervyn King opened strongly in the first match of Day 7’s evening session, reeling three legs on the spin to take the opening set including an 84 finish on the bull, in the fourth leg.

The King continued to assert his dominance on the oche, taking the second set after successfully holding his throw three times to go within one off the Third Round.

The 56-year-old who reached the Quarter Finals at the Alexandra Palace last year, watched on as his American opponent worked his way back into the contest. The Gambler took next two sets including an opening break of throw, after he found double eight with his second dart in the fourth set.

The Winmau man found his A game when it really mattered, including a 62 finish to break the throw in the third leg before proceeding to hold and book his spot in the Third Round once more. The 27th Seed will face either 2018 World Champion Rob Cross or Scott Williams next on the world stage.

The Northern Irishman will face former UK Open champion Nathan Aspinall next in a very interesting tungsten tussle, which will be full of high scoring and drama.

Dave Chisnall averaged over 118 in the second set of his match with Andrew Gilding in the afternoon session, with Chizzy battling from 1-0 down to beat Goldfinger 3-1. The 12th seed will face Stephen Bunting in the Third Round after the former World Champion found a 3-1 victory over Leonard Gates in the last match on Day 7.