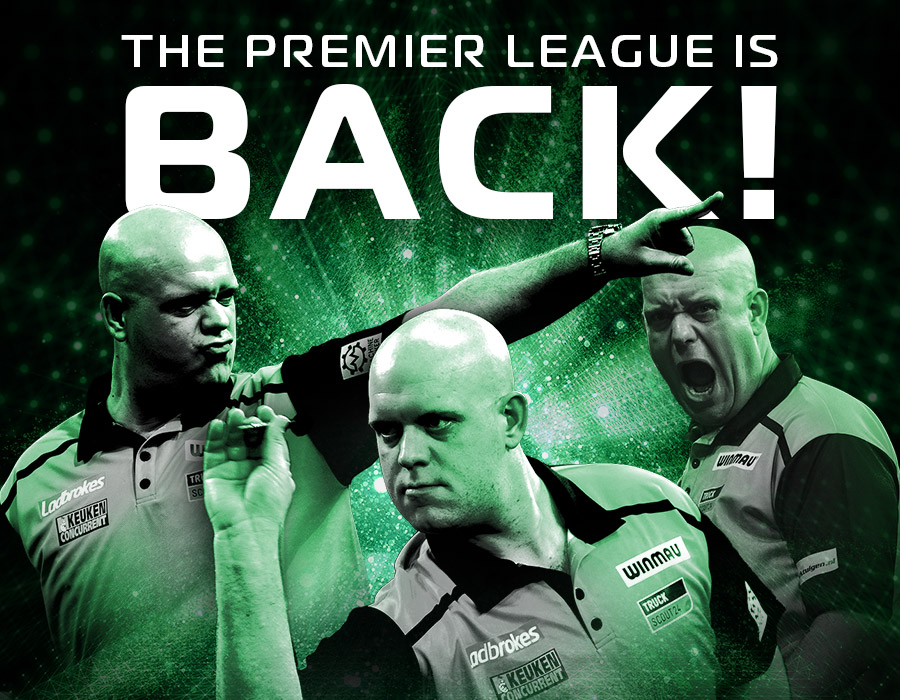 Due to the ongoing Covid pandemic, this year’s tournament will take place in four blocks of fixtures at the Marshall Arena – the first 5 matches will take place this week across April 5-9.

The first phase will then conclude over April 19-22, as players face each other once in the league phase, before the bottom two players are eliminated following Judgement Night.

The battle for the £250,000 top prize continues in the second half of the season with Nights Ten-12 staged across Wednesday May 5-Friday May 7, with Nights 13-16 held from Monday May 24-Thursday May 27.

The Play-Offs, where the top four players from the league table contest the semi-finals and final, will then take place on Friday May 28.

MvG comes into his 9th consecutive appearance in the Premier League as World no.2 and is looking to claim title number 6, equalling Phil Taylors record of Premier League titles.

"Last year was unusual I think for a lot of players, and I played really poorly, but now it's totally different. I think I'm in better form than I was and I'm looking forward to it," said Van Gerwen.

"Everyone knows that if I'm on my form, no-one will beat me. This tournament is perfect to get back in your rhythm.

"The Premier League is a lovely tournament and I know what it's like to win - I want to do that again."

Gerwyn Price enters the 2021 Premier League as the reigning World Champion and faces a repeat of January’s World Championship final, as he takes on the flying Scotsman Gary Anderson.

Having claimed glory at Alexandra Palace, Price completed his stratospheric rise from amateur to number one in just seven years, and the Welshman is relishing the chance to reach the Premier League's Play-Offs for a first time.

"It's good to get back into action and despite the circumstances I'm looking forward to it," said Price.

"Obviously everything's still behind closed doors and we all want to get back to normal - especially with the Premier League, which is so important for fans and we miss them.

"It's going to be a difficult tournament so it would be nice to get some points on the board early on and take some of the pressure off and give me some confidence.

"I've finished fifth in the last two years but I'm in a lot better place now and playing well. I want to try and make the Play-Offs this year and give it a good crack, because I've not made the top four before.

"I'm a world number one and the World Champion, and I believe in my ability; I'm not just there to make the top four, I want to top the table and win the trophy too."

Jonny Clayton has been the in-form player of 2021 after winning his first TV major title at the Masters in January, adding two Players Championship ranking titles this year too. “The Ferret” is one of three debutants in a fresh Premier League line-up and will be looking to draw on his previous experience as a Contender in his maiden campaign.

"I'm playing well, my confidence is high and I'm looking forward to it big-time," said an excited Clayton. "It's one of the best competitions in the world of darts and I cannot wait.

"I had a taste of it last year as a Contender and I'm a happy man to be in it. To be a part of it as a full-time member is a dream come true.

"It's going to be difficult because it's an excellent field. I won't look to far ahead, I'll try and go step by step and try and win each game as it comes along."

Peter “Snakebite” Wright had recently moved ahead of five-time Premier League winner Michael van Gerwen in the PDC Order of Merit before MvG edged back ahead, and is well prepared for his eighth Premier League Campaign.

“I’ve been trying for a change and different set-ups and I needed to get something out of my head in the Super Series, I went back to the diamond darts with some different darts and slightly adjusted my throw and I really started playing well again.” said Peter Wright

“It paid off at the last Super Series event and I felt comfortable again, feeling ready to hit those consistent 100+ averages. I’m ready for this year’s tournament and can’t wait to get playing”

Debutant Van den Bergh has recently moved to the UK, basing himself in Leicester and practising with PDC ranking event winner Damon Heta.

The popular Belgian will be playing without a leg brace for the first time since the World Matchplay, following surgery on a knee problem.

"I've worked hard on the knee and I'm feeling good. The main goal was the Premier League and I'm still being careful," Van den Bergh explained.

"I'm still building the strength in the muscles, working on the balance and building my trust in my leg. Walking around without a knee brace is such a relief - it's been a long road but I feel like I'm reborn.

"I'm very excited. It's a dream come true to be a part of the Premier League and I definitely believe I can win it. Hopefully it can be something similar to the World Matchplay."

The remaining eight players will then play each other across a further seven nights from Wednesday May 5-Friday May 7 and Monday May 24-Wednesday May 26.

The top four will then compete in the Play-Offs on Thursday May 27 where the champion will be crowned.

The Unibet Premier League will be broadcast through Sky Sports in the UK and Ireland, RTL7 in the Netherlands, DAZN in various worldwide territories including exclusively in America, as well as through the PDC's global broadcast partners and on PDCTV for Rest of the World Subscribers outside of the UK, Ireland, Netherlands & USA.