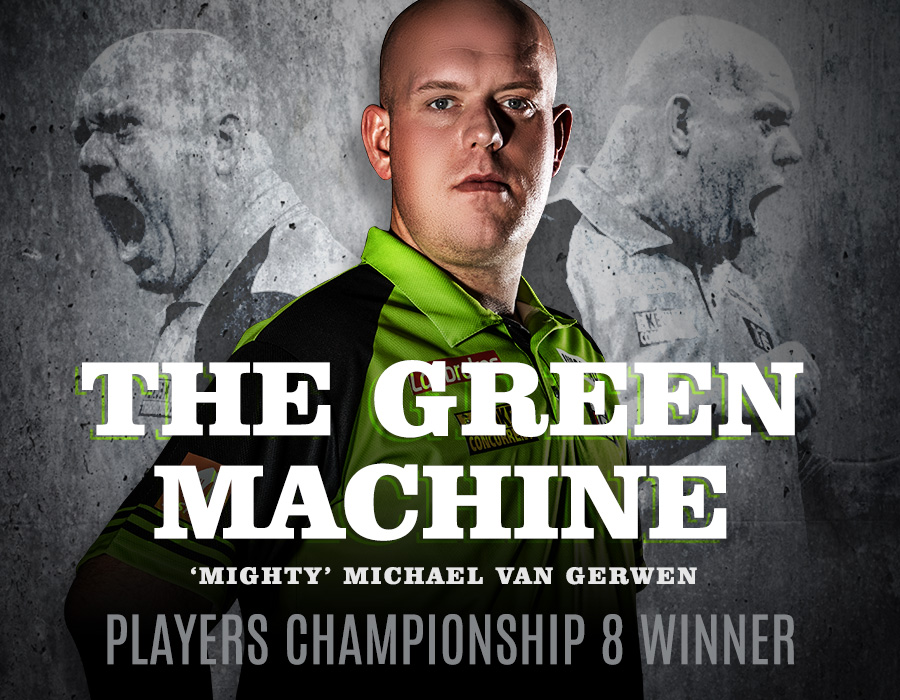 Michael van Gerwen won his first Pro Tour event of the year, beating Martin Schindler in the Final of Players Championship 8 in Niederhausen

Michael van Gerwen won his first Pro Tour event of the year, beating Martin Schindler in the Final of Players Championship 8 in Niederhausen to add to his two Premier League wins and German Darts Championship victory as his achievements this year.

“Mighty Mike” knew the form his opponent was in going into Final with Schindler on route hitting a total of 22 180s in just 38 legs off darts in a strong display by the German, who knocked out the likes of an in-form Rowby John Rodriguez and Adrian Lewis in rounds prior.

Van Gerwen also came into the Final on the back some good form, with averages of 101 in beating Brendan Dolan, Geert de Vos and Jim Mosten. He also beat UK Open champion Danny Noppert 6-3 in the Last 16 on route in a strong darting display from the Dutchman on the Sunday.

The former three-time World Champion played his best darts in the Final when it really mattered, beating Schindler 8-4 in the Final with the German on home soil in Niederhausen. The Dutchman closed out victory with his first dart at double tops after leaving it with a treble on his previous visit.

He averaged 102.40 in the Final and the win in Germany sees van Gerwen back to Number Three in the World with James Wade reaching the quarters on Sunday and Michael Smith not taking part in any of the weekend’s action.

Ninth seed on the Pro Tour Order of Merit Daryl Gurney continued his strong start to 2022 by reaching yet another Quarter Final of the Players Championship events losing to Martin Schindler.

Gurney came through some close matches including a 6-5 win against Krzysztof Ratajski in the Last 16 where he averaged seven points lower than his opponent.  “Superchin” has always throughout his career been deadly on doubles and showed this ability against the “Polish Eagle” with Gurney taking out the right shots at the right time to reach the next round.

The action returns on Thursday as the Premier League heads for Birmingham. Michael van Gerwen takes on James Wade whilst Joe Cullen takes on Saturday’s winner Gerwyn Price in a huge match in the race for the Playoffs.